Alexandra Tanya and Aaron Weller are preparing to take Miss Amara to the US. Source: supplied

Online rug retailer Miss Amara has relaunched YP Threads, a Brisbane-based party shirt business that went into liquidation in June, after acquiring it for an undisclosed sum.

The differences between the two brands are apparent on their respective Instagram pages, where Miss Amara’s page is almost entirely composed of soothing neutrals while YP Threads’ page features customers wearing its colourful party shirts often with a boozy beverage in hand.

But the two brands have one important thing in common, according to Alexandra Tanya, co-founder and chief experience officer at Miss Amara.

“The thing about Miss Amara is that we’re so focused on our community and YP Threads is the same. As soon as we went on their socials, we saw that customers have their own community and are sharing photos with each other organically,” Tanya told Inside Retail.

“They have a lot of the ingredients that we think make up a magical business.”

Over $20 million in revenue

YP Threads was started in 2016 by brothers Jake and James Kelder with the goal of becoming the country’s biggest direct-to-consumer online retailer.

Last year, the brand branched out beyond its core offering of party shirts, board shorts and socks made from custom-designed products and secured contracts to supply corporate and sportswear to Rugby Sevens teams in the US, according to Mumbrella.

It’s unclear exactly why the business went into liquidation, but in March, the brand posted a message on Instagram acknowledging that it had “taken a hit” from the drop in spending due to COVID-19.

Tanya said the brand’s strength was always its product and custom designs, and that there will be even more of a focus on the community going forward.

“We’ll make it more about the customers and their party,” she said.

The acquisition comes as Miss Amara is experiencing a period of rapid growth. The online-only retailer is on track to generate over $20 million in revenue in the 2021 financial year, which would see its revenue more than double three years in a row.

Like Temple & Webster, Adairs and Harvey Norman, which all reported an increase in sales in the fourth quarter, Miss Amara saw growth accelerate when people went into lockdown.

“Everyone was working from home and all of a sudden the rug that was on the to-do list – when you’re looking at it every day – became a priority,” Tanya said.

The team doubled during the pandemic and now numbers more than 30.

Just six years ago, the Miss Amara team was made up of the three co-founders: Tanya, her partner Aaron Weller, who is CEO, and his sister Amie Weller Colbert, who is no longer involved in the business.

In 2014, Weller, the owner of a cloud hosting company, started to notice there was a significant search volume for buying rugs online. This resonated with Weller who had tried and failed to purchase a rug online himself. And after asking family and friends, he realised it was a common occurrence.

“People would get extremely inspired, go on Pinterest, find amazing photos and then reality would hit,” said Tanya, the only one of the three co-founders who had actually purchased a rug online before starting Miss Amara. 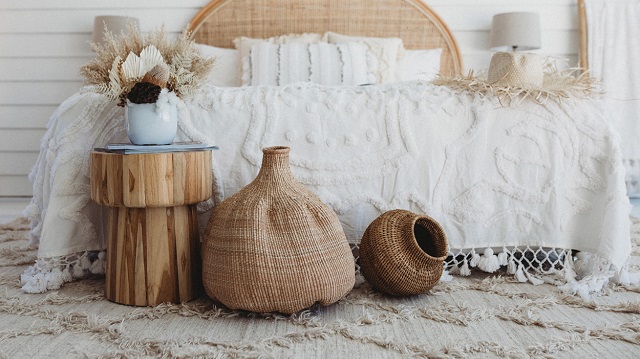 The online rug retailer is on track to turn over more than $20 million this year. Source: supplied

The problem was that the experience of buying a rug online at the time was “terrible”, she said.

“Our competitors had thousands of SKUs, but they were all product photos, there were no inspiring photos of rugs in beautiful spaces.”

The size of the purchase – both in terms of the cost and dimensions – was another reason people struggled to pull the trigger, the co-founders realised.

“Most people have never bought a rug before, and they get overwhelmed and put it in the too-hard basket,” Tanya said.

The co-founders decided to solve all of these problems with Miss Amara. In addition to providing inspirational photos of rugs in-situ, they also offered a first-of-its-kind return service, where, if the customer didn’t like how the rug looked in their home, Miss Amara would pay a courier to pick it up and offer a full refund.

“Nobody has been able to copy that particular offering,” Tanya said.

To keep the cost of returns down over time, they hired interior design experts to provide free styling advice in lieu of customer service agents, and developed a virtual rug styling tool that uses augmented reality to help customers visualise what a given rug will look like in their living room or bedroom.

At the same time, they started working directly with artisans in India and Turkey to produce their own products, which has allowed the brand to offer on-trend styles at lower price points.

The strength of the offer has fuelled demand from customers not only in Australia but other markets around the world. Last year, the business expanded to New Zealand after Kiwis kept asking when the brand would start shipping overseas.

Miss Amara also has a presence in Hong Kong, where Tanya and Weller are now based.

Later this year, the business will launch in the US.

“It’s not a simple flick of the switch,” Tanya said of the process of shipping big and bulky items like rugs to a new market. This has been further complicated by travel restrictions due to COVID-19, which have prevented the co-founders from meeting new partners and advisors in the US in person.

“It’s very challenging to not be there, but by the same token, the pandemic has almost helped us because we’re now moving to this new reality where people realise it’s not going to be a temporary thing, it’s here to stay, and they’re coming up with innovative ways to solve problems remotely,” she said.

NOW READ: Stand out in four steps: How local retailers can compete with big brands online