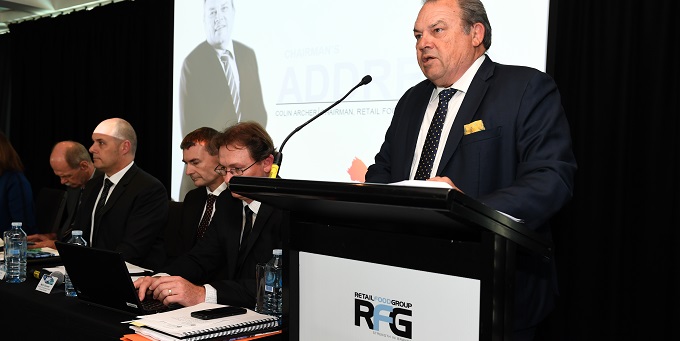 The Senate inquiry into the franchising sector has recommended an inter-agency investigation into Retail Food Group (RFG) and its directors over allegations of insider trading, tax avoidance, breaches of consumer law and other market disclosure and valuation failings.

Current and former RFG directors, as well as senior executives, are likely to be pulled before investigators at the Australian Competition and Consumer Commission (ACCC), Australian Taxation Office (ATO) and Australian Securities and Investments Commission (ASIC), which will also probe companies they directly manage or hold a beneficial interest in.

The Senate inquiry devoted an entire chapter of its 369-page report to ASX-listed RFG, which yesterday was forced to shoot down speculation it was contemplating appointing administrators amid ongoing fallout from a Fairfax media investigation into its business in 2017.

The committee also recommended a broader overhaul of the regulation guiding the franchising sector, including better legal protection for franchisees, improved disclosure and tougher penalties for franchisor wrongdoing.

It criticised regulators for failing to pursue RFG with investigations that have led to court action, given the nature of allegations against the franchisor, including “serious” systemic churn and burn claims.

RFG skewered: “Profit at the expense of franchisees”

But the committee reserved its harshest criticism for RFG itself, which accounted for about a sixth of the over 200 submissions to the inquiry.

“Evidence to the committee revealed serious problems with the sustainability of the franchise model operated by RFG,” the committee said.

“It appears RFG has operated a particularly unjust business model in which shareholders and senior executives have profited at the expense of franchisees.”

The committee, which said it “was under no illusions as to the scale of the problems at RFG”, skewered the franchisor for damaging the reputation of franchising in Australia, pulling few punches in its assessment of how franchisees have been treated.

Referring to a more than 97% plunge in RFG’s share price since Fairfax published its initial reports, the committee pointed to auditor PwC’s doubt the franchisor has the capacity to continue as a going concern.

“It provides scant comfort either to the franchisees whose lives have been destroyed by RFG’s business practices or to those struggling franchises that are still locked up in RFG’s business model and would be negatively affected if RFG is unable to keep its lenders happy,” the committee said.

RFG has been scrambling to close stores and sell off assets to keep the ship afloat in recent months after former chief executive Richard Hinson jumped ship after less than a year in the job last December.

Data provided by RFG to the committee shows the network closed over 300 stores worldwide in 2017-18, opening about 100, as it turns to downsizing to stem the bleeding.

For its own part, RFG blamed retail market conditions and commercial rent conditions for its poor performance in submissions to the committee.

But the committee identified evidence RFG has engaged in widespread churning and burning of franchise outlets, opening stores which are “unlikely to be viable” to rake in up-front fees, while leaving existing outlets to struggle.

However, when asked for data which could verify or refute the churning allegations, RFG refused on four separate occasions, leading the committee to conclude RFG may have misled parliament, or are just incompetent.

“One possibility is that RFG is seeking to avoid providing data that would, in fact, substantiate the allegation that RFG churned sites across its networks.

“If this is the case, then RFG may not only have engaged in unethical business practices but may also have misled Parliament,” the committee said.

Brumby’s Bakery founder Michael Sherlock, who sold his business to RFG in 2007 and has been critical of the business in recent years, says he’s pleasantly surprised by the committee’s verdict.

“Franchising isn’t really suited to publicly listing, because they’re reporting to shareholders as their main customer, not the franchisee,” Sherlock tells SmartCompany.

“As soon as a listed company gets in there and the idea is to increase profitability and revenue, they keep all the advertising money, keep all the rebates.

“[RFG] made it unattractive to own a franchise and started charging fees for anything they could think of.”

The committee has also sought information from the ACCC, ASIC and the ATO on any ongoing or prior investigations into RFG.

It said it was “surprised” none of the relevant regulators, given the nature of allegations raised against RFG, appear to have undertaken investigations leading to court action.

“This is a strategic system-wide approach to business whereby RFG’s ‘success’ relied on extracting profits from its franchise systems with hugely deleterious results for franchisees.

“When a business model displays such apparent risks, discrete investigations into individual franchises are insufficient,” the committee said.

“The committee notes the ACCC, the ATO and ASIC are yet to conduct comprehensive, systemic and forensic investigations into the actions and operations of RFG and its current and former executives.”

The ATO cited taxpayer confidentiality laws and wouldn’t cough up any information on any possible tax avoidance probe, while ASIC said it had reviewed RFG in the past and found no issues requiring further review.

ASIC did say it wouldn’t comment in a way which could affect the market though.

The ACCC confirmed it is investigating RFG’s conduct in relation to Australian Consumer Law breaches and the franchising code.

The committee has recommended the ACCC be given new powers to investigate alleged churning and burning behaviour in the franchise sector, similar in nature to the proposed product intervention powers of ASIC, currently before parliament.