Aussie alcohol-free drinks businesses Sans Drinks and Brunswick Aces are among the speciality bottleshops and bars riding the boom in demand for alcohol-free booze.

During the pandemic, the shift to at-home drinking, coupled with increasing health concerns, accelerated the consumption of sophisticated non-alcoholic drinks, helping businesses expand their offerings.

Irene Falcone, founder of Sans Drinks and former owner of Nourished Life, says the market has “exploded” because the quality of the products has improved.

“If you do drink alcohol and want to have a break or drink less, then you now have options,” Falcone tells SmartCompany.

Global research firm IWSR has been tracking the growth in the no- and low-alcohol drinks market. Its Drinks Market Analysis report found more than 65% of consumers want to discover new brands this year.

It’s no surprise then that sales in Australia of no- and low-alcohol products are predicted to rise 16% between 2020 and 2024.

Falcone opened her second bottleshop in the northern Sydney suburb of Freshwater in late May, after starting her online store in October 2020 during the COVID-19 pandemic.

“It was actually a really seamless process,” she says. “I already had a shop located at the front of my warehouse at Brookvale.”

Across its two bottleshops and online store, Sans Drinks stocks 80 brands, from alcohol-free wines and beers to ciders and spirits.

A standard bottle of wine costs $10 to $30, while the most expensive non-alcoholic gin is about $50.

Falcone says the second store’s first week of trading was “just crazy” and the business is on track to hit $10 million in turnover by the end of next financial year.

It’s a promising start that Falcone says has led her to start discussions about franchising the business.

“The target is 20 stores in the next three years across Australia,” she says. 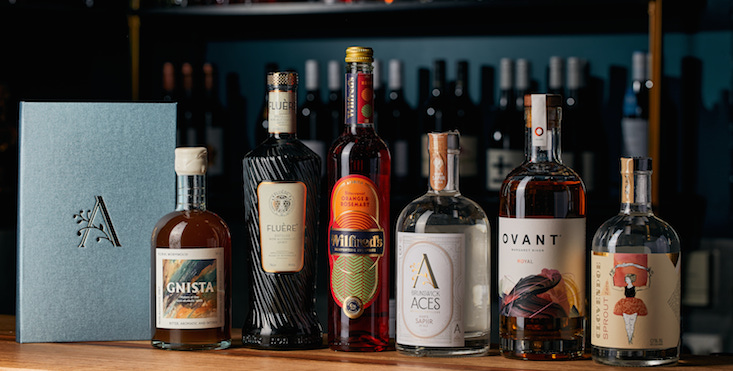 Some of the drinks available at the Brunswick Aces bar. Source: supplied.

Brunswick Aces, a distillery and bottleshop located in Melbourne’s inner northern suburbs, was busy fitting out its new bar during the state’s lockdown last year.

Founded in 2017 by six friends, the business is known for its non-alcoholic spirits called sapiir, which it wholesales to Australian businesses and exports overseas, including to Dubai and Singapore.

The distillery’s most popular line, Spades Sapiir, is a dry gin-like drink with notes of cardamom and parsley. Its sales have grown 500% year-on-year over the last four years, says Henshall.

At the start of May, the business opened its industrial Baroque-style bar to alcohol-free and sober curious customers, selling a range of cocktails, wine and beers.

“We’re trying to alleviate the apprehension by being the hub of non-alcoholic beverages,” Henshall says.

Along with sapiir-based cocktails, the bar sells wine, beer and cider from mostly Australian suppliers, with prices starting at $6 for a glass of wine.

After an incredibly busy opening, Henshall says it became clear cocktails were the most popular item on the menu. 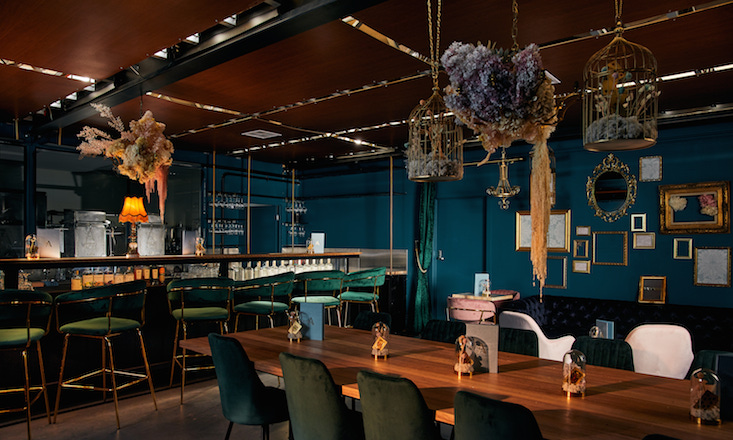 “We attribute that to cocktails being quite difficult to make at home because you have a few ingredients in there that take a lot of time and effort to make,” he says.

The second most popular item on the menu is beer, which — out of the entire non-alcoholic drinks category — is widely recognised as having the best quality.

Thanks to major brewers investing in no- and low-alcohol beer and cider, those products make up for 92% of sales in the market globally, according to IWSR.

While the main reason people want to drink alcohol-free beverages is due to health concerns, Henshall says there are other factors too.

Religious practices, and the desire not to “look messy on social media” all motivate customers to visit his bar.

“People want clear heads, and they want to enjoy their life without being brought down by a hangover,” he says.

“There’s nothing worse than seeing a picture of yourself the next day where you’ve got one eye open and you’re not looking your best.”

Heaps Normal is an alcohol-free beer brand. But take one look at the ads, the socials and the community, and it’s clear this is more than another option for the designated driver.