Supermarket giant Woolworths has been hit with a deluge of customer complaints after a small Victorian business informed shoppers its biscuits had been dropped from shelves in all but two Australian states.

Over the weekend Kookas Country Cookies, a biscuit producer based in the Western Victorian town of Donald, apologised to customers after being notified by the supermarket giant its products will be pulled from Woolworths stores in every state except Victoria and Tasmania.

The business asked fans of the locally-made treats to share support via social media.

“Thank you for supporting Kookas and Australian manufacturing it really does mean a lot to the team,” the company said in the post, which has since been shared more than 10,000 times. 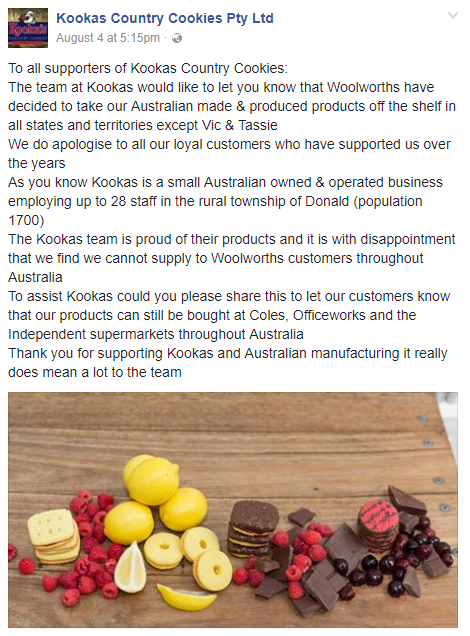 This morning a spokesperson for the business, which employs 28 people in the town of Donald and is owned by members of the town, said the company is planning to apply for the decision to be reviewed.

The company says the supermarket giant should “give us a bit of a crack” at selling more units by improving the placement of its products in the store.

Kookas products are still available from other retailers, including Coles, IGA and Officeworks stores, however, the team is now dealing with the disappointment of losing a big part of the Woolworths network, despite being a well-loved Australian brand.

“If people don’t want to buy them, that’s fine — but we know they’re buying them in Coles and the IGAs, and I think it’s the position of the biscuits [in Woolworths that needs reviewing],” the company spokesperson told SmartCompany.

The company is hoping for a second chance, explaining that despite seeing a rush of online orders this morning, a brand like Kookas really does need to have strong distribution channels across the major supermarkets to succeed.

“It’s so disappointing that we’ve worked so hard to get it out there. People love our biscuits and they love the idea that it’s Australian,” the spokesperson says.

The company understands that love alone won’t sustain a small business, however, and that shoppers need to be able to discover independent brands in order for them to thrive.

Kookas said after 12 months of conversations with the supermarket, Woolworths informed the team at the end of last week that its products weren’t hitting the desired metrics to stay on shelves.

Shoppers have taken to the Woolworths Facebook page to beg for the decision to be overturned, accusing the supermarket of “annihilating” local producers.

“Shame, Woolworths,” said one customer, while another called it “absolutely disgraceful”.

Kookas tells SmartCompany it intends to appeal the supermarket’s decision, but says any dealings with big distributors take up an enormous amount of time for a small business.

The relationship includes a large volume of general paperwork, as well as time spent preparing and travelling for meetings, including an annual 12-month review that requires the company to travel from Donald to Sydney for a brief meeting at Woolworths HQ.

A spokesperson for Woolworths told The Bendigo Advertiser yesterday the supermarket is committed to supporting Australian products.

“We work hard to ensure we are responding to our customers’ buying habits and that the products on our shelves reflect what our customers want to see,” the supermarket said.

This afternoon a Woolworths spokesperson told SmartCompany the retailer is supporting local suppliers wherever it can, and shoppers will continue to be able to access the product in two states.

“In fact, more than 90 percent of Kooka’s overall sales come from Victoria and Tasmania,” the spokesperson said.

Despite the tough week, Kookas says it has been heartened by the outpouring of public support for the business, which was created in the first place to boost employment in Donald 27 years ago.

* This article was updated at 2:00pm on August 7 to include comment from a Woolworths spokesperson.

It is against the Free Trade Agreement to support Australian Companies in preference to foreign companies. Woolworths knows this. They must import everything or at least use foreign subsidiaries. And then it also depends on how much the Supplier is prepared to pay Woolworths for shelf space.

Having been on the wrong end of a Woolworths supply they do not give a toss. Ethics, helping your fellow citizens etc etc.. do not exist. But they are happy to greenwash us with Fair Trade coffee etc.

Kookas should make their ww and facebook more prominent. Ideal for gifts: find a fulfilment house in ?Ballarat for direct orders at better margins.

Going to miss them Kookas. Sad that local businesses are not being supported they way they should be.

They might find it less heavy going if they didn’t have such a stupid brand name?