A bar with plastic-free stirrers and straws. Source: Unsplash/YesMore Content.

From March 1, 2021, the sale, supply and distribution of single-use plastic straws, cutlery and stirrers will be banned throughout South Australia.

Olesinski cited an abundance of waste flowing into the coast from storm drains following heavy rainfall, and coastal wildlife found dead from plastic consumption, as major motivators for surf life-saving to support the single-use-plastic ban.

“We’ve got to do something to eliminate that sort of impact on our coastal creatures,” Olesinski said.

“We sell mountains of [environmentally friendly products] already, and more and more people are switching over,” Rosman said.

“[The single-use-plastic ban] will probably be good for us actually … it will make things quite easy for us [because] now we’ll just have one product range we can pitch to customers,” he said.

“BioPak is making things as affordable and as close to all the plastic things as they can, so they can compete already.”

While the single-use-plastic ban will not be implemented in other Australian states, Rosman said Noarlunga Packaging would phase out as many plastic products as possible, even for their interstate customers.

“We’re all for doing the right thing by the planet and we just won’t stock [plastic products] anymore eventually,” he said.

Co-owner and manager of Adelaide cafe Laneway Espresso House Debra Robinson felt the implementation of the single-use-plastic ban should not be difficult because the hospitality industry had been given enough notice.

“We switched over [to compostable products] last year,” Robinson said.

“We have wooden cutlery and our takeaway cups are all biodegradable, and we use cardboard for the takeaway of our toasted sandwiches and things.

“We did go to stainless steel straws, and then COVID hit, so we’ve gone back to the paper straws.”

While alternative products are slightly more expensive than plastic, Robinson hoped prices will go down as those products become the norm in South Australia.

Robinson and Olesinski said young people are particularly conscious of being environmentally friendly.

“A lot of younger people, they’ve been brought up with environmental education in the school system,” Olesinski said.

“We’re just continuing that in our recreational and community service pursuits.”

The single-use-plastic ban correlates with Surf Life Saving’s ECOSurf program, which was adopted in July 2020. The program’s main objectives include litter and waste management, recycling, stormwater pollution prevention and measures to conserve water.

Olesinski said while he thought people are prepared to do the right thing going into the single-use-plastic ban, they need to be careful not to do more damage to the marine environment while doing so.

This was evidenced by a picture (below) posted to volunteer environment group Adopt a Spot’s Facebook page, which showcased stacks of plastic stirrers and forks washed up at an Adelaide beach after seemingly being dumped ahead of the plastic ban. 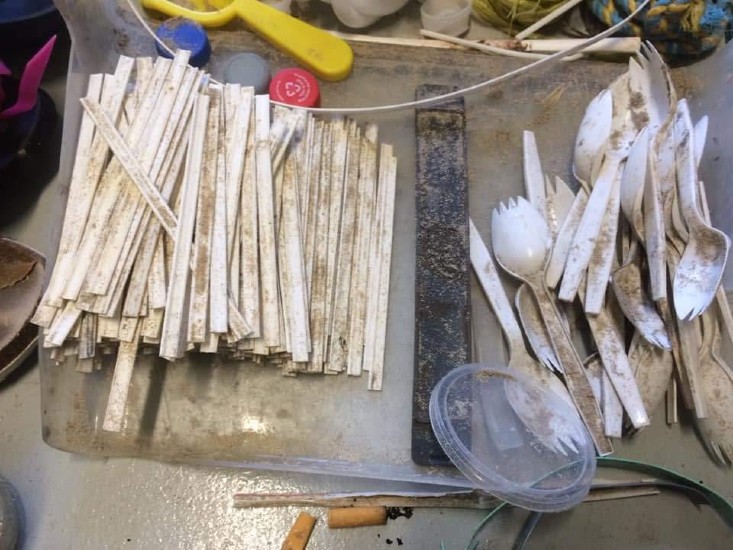 “We have the most pristine coastal area, and we’ve got to protect it,” Olesinski said.

Robinson said most of the hospitality industry wanted to “take care of their part” when it comes to limiting waste.

The single-use-plastic ban legislation passed State Parliament in September 2020, but implementation was delayed due to COVID-19, allowing the hospitality industry to continue to use single-use products for hygiene purposes.

The ban is expected to extend to polystyrene cups, bowls, plates, clamshell containers, and all products with oxo-degradable plastic in early-2022.

The pandemic has paused sustainability and accelerated plastic production: We need to reverse this trend before it’s too late

How could a global pandemic press pause on sustainability goals and awareness, and instead, make plastic fantastic again?

How LEGO is reducing plastic without compromising its product

LEGO has committed to reducing its plastic usage by changing the way its products are made for the first time in over 50 years.