Amazon Australia has left sellers waiting in limbo since its ‘soft launch’ last Thursday as the e-commerce giant works to fix technical issues.

Amazon informed a number of its sellers by email to “prepare to receive orders” on November 23 for a testing phase of the widely anticipated site.

However, a week later some sellers claim they have experienced problems including the inadvertent upload of “inactive” products to the site on the day of the ‘soft launch’.

Amazon was also described as more “complicated” than eBay’s system.

Angus Kidman, technology expert and editor-in-chief of Finder, said he was aware that Amazon had identified a “few issues that were being worked on”.

Gift store Yellow Octopus, which was one of the select few retailers chosen for the ‘soft launch’, told The New Daily the process was “not exactly smooth”.

Yellow Octopus’ marketing manager Matt Lawry said only about eight or nine of its products were listed — such as T-shirts and books — and the number of items had remained stagnant since last week.

“We tried to list as many products on the Amazon catalogue as possible, however it is a hugely involved process,” he said.

“Despite having hundreds of products on the database, come [soft] launch, only a handful of products — seemingly totally at random — went live and nothing has really changed since then.

“We were expecting probably a larger cross-section of our 4000 products, if not close to the real thing.”

Lawry said some of Yellow Octopus’ “inactive” products, which were not in stock and not intended for Amazon, were uploaded during the ‘soft launch’, including a hot tub boat.

“When the database was uploading, some of our inactive products became live unintentionally,” he said.

“I’m not sure if that was a technical glitch on their end.” 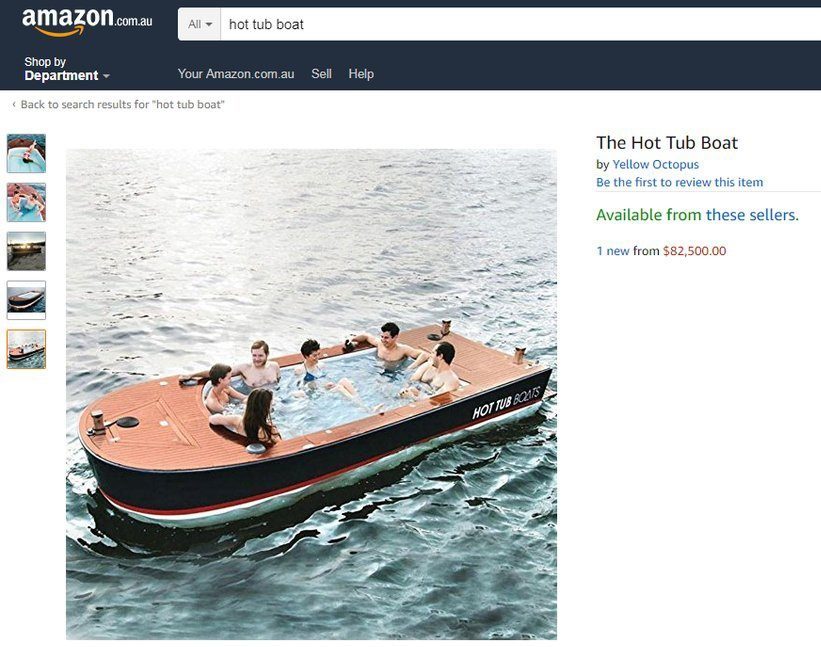 A screenshot of Yellow Octopus’ hot tub boat offering that was published on Amazon Australia’s site in error during the ‘soft launch’ on November 23. Source: Supplied

Lawry said the company, which also sells its products on eBay, found that eBay’s system of uploading items to its website was “much easier”.

He said it was complicated to upload items to Amazon’s catalogue because “everything needs to be intricately categorised”.

“We’ve been in serious Amazon mode. It was a fair bit of work and it’s all been a bit anti-climatic,” Lawry said.

“We’re excited, but it’s all smoke and mirrors at the moment. We have no idea when it will officially launch. We’re just waiting.”

Another seller, Costumes.com.au, told The New Daily almost 1000 of its products were listed on the website including costumes, party supplies and Christmas products.

Co-founder Nathan Huppatz said all sellers have been told by Amazon to be ready to sell within six weeks, at any given moment.

“Whenever I’ve asked for any hint of a launch date, the walls have gone up,” he said.

“I’ve spoken to a lot of other sellers and the general feedback is that they’re taking a little while to work out how to list products and to manage their inventory.

“It’s a fairly technical marketplace, very data focused. It is a bit different to eBay.”

When asked about whether costumes.com.au had received any orders, Huppatz said he could not comment.

In the email notifying sellers of the ‘soft launch’, Amazon Australia told sellers they would be provided with “regular” updates by email in the lead-up to the launch of Amazon in Australia.

But at this stage sellers tell The New Daily they have since had no contact from Amazon Australia.

Despite repeated attempts to obtain comment from Amazon Australia and its representatives at the Sydney-based PR agency Weber Shandwick, The New Daily did not receive an on-the-record response.

Despite the launch glitches, be in no doubt that the retail landscape will change considerably more over the next 24 months. Amazon will get this right; and, in fairness, they have provided Australian Retailers (particularly B&M Retailers) with plenty of forewarning, and time, to change the way they engage with and serve consumers. At least Amazon is having a crack at disrupting legacy behaviours. And I love B&M. The most important message I could pass on to all B&M Retailers is that it is not too late to innovate, and starting today is so much better that starting tomorrow or the next day. Just get it started with something. Many small, lower risk, innovations may be more palatable than a large scale rework, but the message is, start something, and fast. It is critical to have people in your team who can selectively forget the past, particularly things that made you succcessful today, so you can discover the things that will drive your success through tomorrow. Recognise the natural conflict between past successes and future innovation. (see Three Box Strategy). This will require discipline, leadership and focus, but is entirely doable. There are plenty of great innovations that can be easily introduced to engage consumers within the physical store to boost the reasons for being there. I’ve spent the last three years developing and pushing B&M in-store engagement innovations and I forsee in-store experiences that can be entertaining, engaging, mutually beneficial, functional and unique. All great reasons to keep foot traffic skipping.

In Australia, people often forget, that unlike eBay, Amazon is an innovator, a logistics company employing over 45’000 robots and probably the largest marketplaces seller on Earth. So we all should be very careful before blaming Amazon for all the trouble. If someone does not know how to drive a car, can you blame a car manufacturer for that? Amazon AU technology is 85% based on the Amazon USA technology so I see no reason why it should not work Down Under. Listing tools are more suitable for listing on Amazon AU at this moment as these work via Amazon API which is pretty much similar from country to country. The Amazon AU user interface, however, is still evolving taking into account localisation requirements. My advice to those who struggle is: get the listing tool that works and spend a bit of time understanding Amazon catalogue structure (this is where you may need to do some thinking).