Online clothing retailer InStitchu has launched its first bricks-and-mortar location outside Australia and New Zealand as demand from international shoppers continues to drive the brand’s growth.

InStitchu sells tailor-made suits primarily through an online store, with customers entering their measurements so that the suit can be designed and customised. The company operates a small number of physical locations too, with sites in Brisbane, Sydney, Melbourne, Canberra, and Auckland.

Last time SmartCompany spoke to founders Robin McGowan and James Wakefield, the duo said InStitchu had plans for international expansion but did not indicate where.

This week the company unveiled its new showroom in New York, with McGowan saying the decision to pursue the American market was based off continued interest from US shoppers.

“We based our decision on data from our online store, we could see a lot of orders coming from the US,” McGowan told SmartCompany.

“It’s always been on our radar, so we thought it was just the right time to set up something more permanent.”

The showroom is located in the heart of New York’s CBD, and with the city’s reputation as a “big suit-wearing location”, McGowan says the company has been focused on promoting a unique Australian angle.

“We’re pushing ourselves as a new Australian brand, and we’re also really pushing the Australian merino wool angle,” he says.

“All fabric in our main range of suits is sourced from Australian wool growers, so we’re really educating customers on how we make our suits from this wool.”

The choice to establish a showroom format store was carefully calculated by McGowan and his co-founder, who wanted customers to seek out their store rather than wander into it. The company also employs this approach in its showrooms throughout Australia.

Customers must make appointments with employees at InStitchu’s showrooms, and McGowan says the approach has been very successful, citing a 90% sale conversion rate after a customer makes a booking.

“This approach is a lot better for customers. It ensures they get a good experience, and they don’t have to worry about people wandering in while they’re getting a suit fitted,” he says.

“It also lets us avoid crazy retail rents and long term leases, and it dictates how much we can spend on acquiring new customers.” 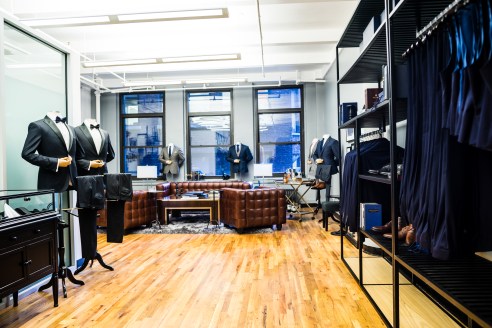 The showroom has been operational for a few weeks already, and McGowan following a positive response from local shoppers, the brand is now turning its attention to working with other Australian brands based in the US.

Although the New York division is headed up by some long-time InStitchu staff, McGowan says the business has also hired some local staff, which wasn’t an issue.

“It’s very easy to recruit in the US, especially in New York. There’s a real interest in fashion and menswear, so we’ve got some great men and women on our team,” he says.

Expanding into the US involved McGowan and Wakefield taking many trips to America in order to clear the road for the showroom to open. But picking the location was the easy part, says McGowan, compared to coordinating a growing business so far from home.

“It was hard coordinating something in a market so far away from what we’re used to. You face the hurdles of registering the company, and dealing with all the red tape,” he says.

“Thankfully we were already shipping products over there so we had some presence already.”

While InStitchu is still focused on the Australian market, McGowan says a further rollout across cities in the US is on the cards. However, he advises other business owners to be prepared before embarking on international ventures.

“It can all look very nice on paper to have an office somewhere overseas, but you need to do a lot of research first. Talk to customers, look at your data, and figure out if it will benefit the business,” he says.

“There will always be hurdles, so talk to the right people and get the right advice.”