Target has scrapped its popular six-month lay-by period for its end of financial year sale on children’s toys, angering customers who have taken to Facebook to vent their frustration.

Many consumers used the mid-year sale to pre-purchase Christmas presents, paying toys off over the next few months.

Target will no longer off the option but will continue to offer its eight-week lay-by terms.

Some customers are “not happy” with the move and have taken to Facebook to vent their displeasure.

“Well done target for making it nearly impossible for single mums with low income to try and give there children a good christmas, a lot of parents rely on the 6 month layby which you now don’t do,” one person said.

“I think your target logo needs to change to green as you are now the grinch of Australia,” another said.

“Not happy about stopping the biggest toy sale and only having 8 week lay-by not fair at all I’ll be shopping elsewhere for Christmas,” they said. 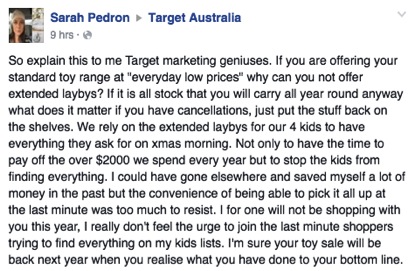 However, Brian Walker, chief executive at Retail Doctor Group, told SmartCompany the six-month lay-by was “an extraordinarily long” period to offer, and two months is more in line with what is expected of retailers.

“It’s quite reasonable and I don’t think customers would mind too much.”

“Target has hard a hard time of it over the past 12 months and want to find ways to reduce inefficiency and return to profit.”

Walker says there was a general shift away from retailers offering lay-by terms, but companies such as Target and Big W need to continue offering lay-by as it is an important aspect of customer service in those businesses.

“Lay-by is declining in relation to more services being offered online,” Walker says.

A spokesperson for Target confirmed to SmartCompany the retailer will no longer offer the six-month lay-by option.

“I can confirm the Target Toy event will take place in July and we will be offering our standard eight-week layby for customers,” the spokesperson says.

“We have made the decision at Target to no longer offer our six month layby, following customer feedback and a change in sales trends.”

“Parents told us that buying toys six months in advance was becoming difficult as kids were changing their minds on what toys they wanted due to promotional new releases and trends.”

“We have worked hard to offer our customers the best possible prices all year round – so customers don’t have to wait for a sale to know they are getting great value.”

Target is in a rough patch and is expected to post an end of year loss of $50 million dollars. In May, parent company Westfarmers said it would book a pre-tax, non-cash impairment of up to $1.3 billion dollars for the chain.

Target is in the process of restructuring, which is expected to cost the company $145 million by the end of this financial year.

What’s the point of lay-bying toys in July and having to pick them up in September and then store them and try to stop the kids from finding them in the 4 months leading up to Christmas. This was also a fantastic option for low income families to budget for paying off their Christmas presents over a long period. I know my daughter, a mum of 3 small kids, has used this process for several years and loved it.