Thankyou Group, the social enterprise that rose to national prominence on the back of its popular bottled water, has unceremoniously exited the category in a push to lower its plastic footprint.

“It’s one of those products we shouldn’t be buying,” Flynn tells SmartCompany.

“We don’t think it needs to be a part of our future.”

Over its 12-year history, Thankyou — which diverts its profits to a charitable trust addressing extreme poverty — has sold tens of thousands of water bottles through vendors such as 7-Eleven and Woolworths.

Proceeds from its highest selling line have helped it raise $6.9 million, but Thankyou says bottled water has always been a “silly product”.

“We naively always thought we’d eventually find a solution that’s a win-win for humanity and the planet,” the social enterprise said in a blog post over the weekend.

Thankyou’s decision to ditch bottled water has been a long time coming; the team attempted to find a biodegradable, or more environmentally friendly solution, that would have enabled it to remain in the category.

But, ultimately, Flynn says any attempt to make bottled water more sustainable would have amounted to greenwashing.

“We realised there was a whole bunch of greenwashing ideas we could apply, but they’re not necessarily better for the environment.”

“I’d like to think everyone is trying to be more sustainable and that looks different for every company, but some companies make genuine decisions and others try to use the environment to sell more products.” 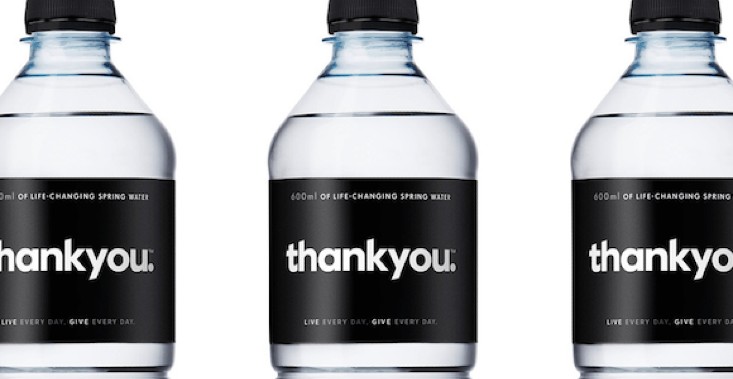 While drinks aisle stalwarts have been going to great lengths to introduce biodegradable plastics in recent years, a growing body of evidence suggests the world needs to drastically reduce its consumption of plastic full stop if we’re to address the environmental disaster the material has caused.

But despite growing public awareness about plastic pollution around the world, the value of bottled water sales has increased substantially in recent years.

When Thankyou was founded, the global bottled water industry was worth $50 billion, today it’s worth $140 billion — almost three times as much. The Australian market contributes $600 million annually.

Flynn says companies need to challenge themselves with hard questions about the role product packaging plays in exacerbating plastic pollution, particularly for products such as bottled water, where alternatives are so readily available.

“‘Unnecessary’ is the keyword,” Flynn says.

But disposable packaging itself remains widespread across the economy, and even Thankyou will continue to sell its range of personal care products, bottled with plastics.

“The simple call to say ‘let’s remove packaging and move to a reusable society’ is a great step, but we’re a long way off that,” Flynn says.

“One of the challenges we have is that as consumers, we like convenience.

NOW READ: Why Thankyou Group is pulling its food range: “It feels hard, but it feels right”

NOW READ: “We all see this going beyond us”: Thankyou Group co-founder Jarryd Burns to leave the business