The collapse of Toys ‘R’ Us in 2018 was a slow and painful one, with the retail chain shutting up shop across its global markets over the course of the year. The closure left many parents in the lurch as to where to pick up a present for their kid’s birthday, largely to the benefit of those retailers left standing.

Amazon and eBay became the de facto places to buy toys online — at least, until Toys ‘R’ Us relaunched its own web presence with the help of Hobby Warehouse earlier this year — while discount department stores Kmart, Target and Big W filled the gap offline.

At the same time, specialty retail chain Toymate saw the collapse of the big fish in the pond as a chance to rapidly expand its offering.

“We were coincidentally opening our first larger format store at the time Toys ‘R’ Us went down,” Toymate founder and director Danny Bloom told Inside Retail.

“And we knew as a multinational business they had a lot of great sites in places that we wanted to be in, but didn’t really want to be there if they were there. So, that presented an opportunity to go after those sites in a new format.

“It was a good opportunity to pick up a lot of staff. We had a good understanding of that business — what was good about it that we could adapt, and some of the things we could do better.” 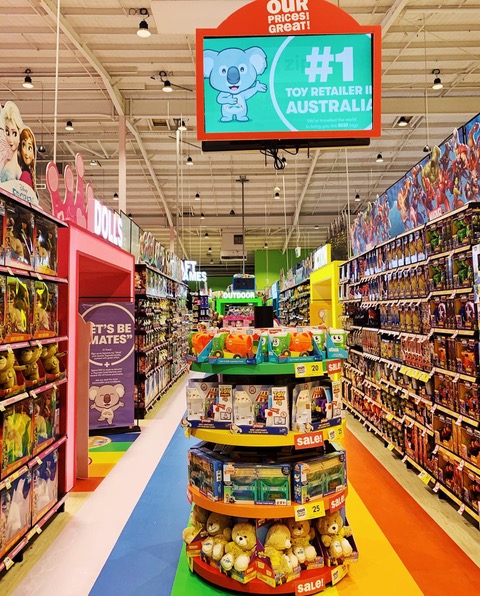 Founded in 2005, Toymate has been fairly conservatively in its approach to expansion, focusing on doing it right rather than doing it fast. But that has changed since Toys ‘R’ Us exited bricks-and-mortar stores in Australia.

“We recently opened our first Canberra store [in Majura Park Shopping Centre]. Until last year we were only in Sydney, and then last year we opened in Robina Town Centre on the Gold Coast, and a store in Perth. This year, we’ve now got a store in Melbourne, and Canberra,” Bloom said.

“In the last year, we’ve had to grow it quite quickly.”

A private, family-owned business, Toymate could become a national chain by expanding into South Australia, the Northern Territory and Tasmania. Bloom said this would occur when, and if, the right opportunity comes about.

“At the end of the day, in toys, for the most part, we’re selling the same product [as the competition], so our ethos is if we can give you the best product at the best price, and a better experience, why wouldn’t you shop with us?”

Standing out from the crowd

This ethos, and the issue of standing out from the busy toy retail market, has led Toymate to push further into the experiential side of retail — with the launch of a new-look concept store in Loganholme, Queensland.

“We’ve got a children’s playground, we’ve got a Yogurberry inside the store, we offer $1 coffees, we’ve got an education room, and a place for adults to come and sit and relax, and increase the dwell time,” Bloom said.

Additionally, Toymate has launched the ‘Festival of Fun’ — an in-store event with character meet-and-greets, face painting, balloon bending, giveaways and prizes for kids, to mark the launch of its Christmas toy catalogue.

Bloom said the Festival of Fun is usually reserved for store openings, but his experience as a new dad has given him greater insight into what parents are looking for and how to bring them in.

“For me, I’ve only just become a parent, and that’s changed my view a bit on what parents are looking for, and I think often people are looking for something to do, and a little bit of something extra for free,” Bloom said.

“That’s a good way of bringing customers in, and that can only be a good thing.”

This piece was first published by Inside Retail.

NOW READ: Toys ‘R’ Us returns to Australia in new online-only deal with sights on 30% of toy retail market