Why this small business owner is considering leaving Amazon Australia: “It’s just all fizz and no substance”

Amazon has been on Australian shores for four months now, but one retailer claims the platform is “just all fizz and no substance”, citing a lack of page views and personal business support as reasons it will be sticking with eBay instead.

Michael Coates is the founder of Trike Bike, the largest seller of adult tricycles in Australia. The Gold Coast business has been operating for just over 10 years, selling tricycles that are designed to support the elderly, people with disabilities, or people with balance problems. The business has a physical shop front, as well as an e-commerce stores on eBay and Amazon.

“We’ve got a proper shopfront but our sales online through eBay have been very strong over the last eight or nine years,” Coates tells SmartCompany.

“We had online sales through our own website that initially did a lot better than eBay, but over time eBay became stronger than our website.”

When Amazon finally launched in Australia, Coates took the opportunity to establish an online shopfront with the retail giant. He hired a consultant for $3000 to set up the online shop, market the products and optimise sales online. However, the sales were far from successful.

“After about three months we hadn’t made any sales at all and it cost me quite a lot,” he says.

“The disappointing thing is I can handle not getting sales if it was a product no one wanted, but we’re just not getting traffic.”

Looking at the Amazon sales console, Coates could see that page views were dwindling, and customers weren’t landing on the right pages to see his products. Coates says his business is one of three vendors currently using the online space within his niche, however, his competitors are only selling one product online each, whereas Trike Bike sells 15 products.

In the four months Trike Bike has been open for business on Amazon, its highest view count on a single product has only reached 17 page views. Its Amazon site was not ranking in search engines either, unlike its eBay store front. 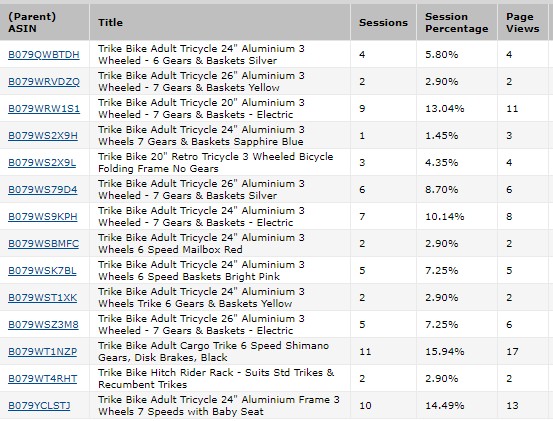 Coates contacted Amazon twice to enquire about the performance of the product listings on the site. Amazon responded with a generic email each time suggesting Coates lower the prices.

“I’ve written to them twice and get the standard reply, saying you’ve got to do this and do that but we used a consultant,” he says.

“When we kicked off on Amazon we had our products selling at a loss just to get sales on the board — and that didn’t even help.”

Coates doesn’t believe pricing is cause for concern, given Trike Bike’s retail success on eBay. The business currently pays $30 a month to list on Amazon, plus commissions on the sales it makes and is yet to make one sale.

It’s unclear whether Australian retailers across the board are experiencing the same issues that Coates is dealing with, but he says there is one significant difference between eBay and Amazon: the individual client service provided. Coates believes Amazon could do far more to support Australia retailers online.

“EBay has a thing called eBay concierge and I’ve asked them to contact me and they’d call you back. With Amazon, you’re on your own,” he says.

Coates says he’ll give Amazon a few more months before closing down the sales channel. But for his business, the return on investment simply isn’t as much as it’s hyped up to be.

EBay runs rings around Amazon, the administrative side of which is a shambles, particularly the U.S.parent site

Do you actually use any of these sites? Amazon AU is a shambles, sure… but eBay is an absolute shocker, too. Amazon US is ok.

Same here.
It’s a total disaster. Some categories not avilable for Australia, but some USA sellers advertise in Australia beacuse they have access to them. Amazon make sure they will deduct some money end of the month for noting.

Interesting that this shop is paying $30 per month for his Amazon shop as i was charged nearly double.

I have exactly the same issue. We have a very successful Ebay store and we also sell a lot from our own website. I listed our best selling products on Amazon over 3 months ago and so far, we have only had 2 sales.
I agree with Don Hesh below, it is a total disaster.
I am happy to have found this article, because this was intriguing me a lot. Now, at least I know that we are all on the same boat. The question is, should we stick around and wait for Amazon to pick up their act and for the Australian Market to adopt it, or should we close our stores and save the monthly fees until it is actually worth paying for them? What a dilema….

Several more months have passed since the original article was researched and published regarding our business Trike Bike, and unfortunately I must report, despite all of the promises made by Amazon after this article was published that absolutely nothing has happened.

After the publication of this article Amazon make contact with me and offered their assistance to relaunch our store and tweak all sorts of things so the future was actually looking positive on this platform but unfortunately they were just empty promises to try and stop further publication of stories like mine. After promises of assistance they just disappeared again, nothing ever happened and after several more months of ZERO sales I am ready to pull the pin.

It is a complete and utter waste of time to be spending this amount of money each month and then when you go and look at the page views. With about 15 products listed on Amazon there are less than 80 people visiting those total 15 products every month! This is just over five people visiting each of our 15 products and not the thousands viewing on other platforms like eBay and our own website.

I expect that I will end the relationship with Amazon at the end of June and put my efforts into other selling platforms. Perhaps I will come back again when they have their platform performing but for now the only information I can give other people who are looking at advertising and selling on Amazon is to not waste your time and money.

Sorry to be so blunt but this is just the way it is, empty promises and zero sales.

Sorry to hear that it’s not working out for you, Michael.

We’ve been on Amazon AU since day one and yes, it’s much slower than other channels such as eBay or our own website… but did anybody actually expect it to be an immediate success? It’s gunna take a couple of years to ramp up. Amazon will gradually work out the kinks, merchants will slowly come on board, consumers will eventually come to understand and trust the platform. It will probably be a huge success… in the long run. Bezos has very deep pockets and loves to play the long game. They’ll take the time to gather the data and they’ll make it work. Merchants who are able to invest a little time/money now – and be patient – will reap the rewards.

Sorry to hear that it’s not working out for you, Michael.

We’ve been on Amazon AU since day one and yes, it’s much slower than other channels such as eBay or our own website… but did anybody actually expect it to be an immediate success? It’s gunna take a couple of years to ramp up. Amazon will gradually work out the kinks, merchants will slowly come on board, consumers will eventually come to understand and trust the platform. It will probably be a huge success… in the long run. Bezos has very deep pockets and loves to play the long game. They’ll take the time to gather the data and they’ll make it work. Merchants who are able to invest a little time/money now – and be patient – will reap the rewards.