As supermarkets continue to battle it out for market share across the globe, one retailer has thrown down the gauntlet: Walmart has unveiled a new in-store item scanning system that seeks to eradicate the checkout.

Business Insider reports the US-based mega-chain is testing new “Scan & Go” technology at a number of stores across North America, using technology that allows customers to download a phone app that scans the barcodes of items as they place them in their trolley.

After customers complete their shop, they can finalise their purchase and pay via the app. To combat opportunistic thieves, customers are still required to have their receipt and cart contents verified by a Walmart employee as they leave, but other that this, they are free to just stroll out of the store when they are finished.

For customers without smartphones, the stores are providing handheld scanning devices, and customers unwilling to pay via Walmart’s app reportedly can still check out at a regular register.

The method is reminiscent of Amazon’s recent foray into bricks-and-mortar supermarkets with its concept “Amazon Go” supermarket — a pilot shopfront that let customers pick up items and walk out without ever scanning the product.

Amazon’s model relies on small sensors within item barcodes registering a product as “bought”, and charging the customer accordingly.

Walmart’s concept, however, relies on smartphone technology already possessed by nearly every modern day customer. The retailer has reportedly rolled out a trial of the scanning software in over a dozen stores in US states, including Kentucky, Florida, and Georgia.

But while these snazzy scanning systems might look like an obvious shoo-in for any local supermarket trying to get ahead of the curve, experts believe Australian consumers shouldn’t hold their breath. 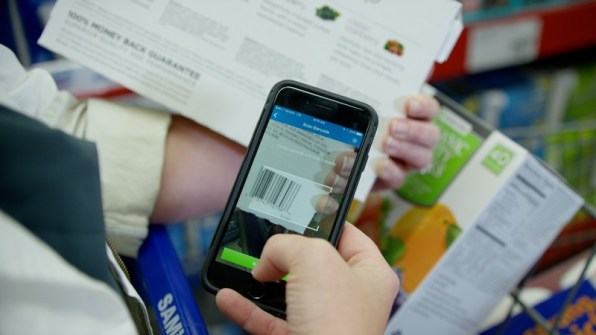 “Australian retailers are notoriously slow to innovate, and if we do, it’s usually because retailers in Europe, Britain, or the US have already adopted or trialled similar things,” retail analyst and academic at Queensland University of Technology Business School Gary Mortimer told SmartCompany.

“But if the world’s biggest retailer Walmart is doing it already, I’m sure Australian retailers will be looking at innovative ways to return the novelty of in-store [shopping], especially with Amazon’s opening.

“We will see it eventually come into place, but it wouldn’t be for a few years.”

The whole “Scan & Go” concept has been evolving over the past five years, believes Mortimer, and Business Insider reports this is actually Walmart’s second attempt at the technology. The allure for retailers is both in a reduction in time and manpower, says Mortimer.

“It cuts down on the time customers are standing at a bank of self-serve registers and it reduces the lines of shoppers around the store. Now they just scan the barcode and walk out,” he says.

As for the Australian retailers most likely to innovate along these lines, Mortimer believes Woolworths could be the most likely, noting the supermarket giant is starting to get back on its feet after being “knocked around” by Coles and Aldi.

“Woolworths is really investing back into their supermarket division quite aggressively so they could potentially be looking to use this type of tech,” he says.

I rarely, RARELY use the automated checkouts, I also tell my young adult son to use the person manned checkouts because it is keeping people employed. If the major stupormarkets fully automate, then I will be taking my grocery shopping elsewhere. I have been using a local butcher and fruit/veg shops over past 30 years….as should everyone, city people have greater choice for this, no excuses.