What will happen when Amazon truly arrives in Australia

There’s been a lot written about the upcoming entry of Amazon into Australia, even though Australians have been enjoying Amazon’s prices and services for almost 15 years.

Founded in 1994, but not really hitting our radar way down here until around the 2000 Olympics, we’ve lapped up most things that Amazon has offered us. As individuals we’ve shopped the main site, and as businesses we’ve bought space in services, initially in Nevada and Texas, and more recently in New South Wales via Amazon Web Services. It’s become a trusted brand in Australia.

Read more: Why Ruslan Kogan believes Amazon in Australia will “lift all boats”

In 1999 I presented at a three-day conference to more than 300 small retailers about the entry of a little know German grocery retailer. Its name was Aldi. I predicted that it would take a decade or two to be able to negotiate its way through our very restrictive retail zoning laws to be able to build national scale. Well it’s taken Aldi 17 years.

In 2010 having walked Zara stores in Europe, I predicted that the Spanish retailer would enter our market as the first omni-channel retailer to launch in Australia, allowing it to open 10 to 20 stores quite quickly, but use the online offering to generate sales of double that. Opening in Australia in 2011, Zara now has 15 stores across Australia and New Zealand but the sales per store are double that for any other fashion retailer due to the online offering. It only took Zara five years.

When Amazon arrives with a full in-market team, it is likely to achieve dominant sales in the sectors it chooses to focus on. And Amazon will achieve more than 20% sector share across the whole of market in less than three years. That’s 20% of the whole of the diaper sector, battery sector and book sector.

The sales growth cycle just keeps getting shorter. That’s the true point of difference around the “digital disruption” when a pure online play enters a traditional retail marketplace. Everything just happens faster.

Their systems are proven, are located up in the cloud, and they need less of everything tangible to grow. Fewer people, no retail space and no checkouts. And like Aldi and Zara, Amazon understands the power of “retail own brands”. When Amazon launches an own brand into a sector, it does so to win in that sector, as this infographic demonstrates. 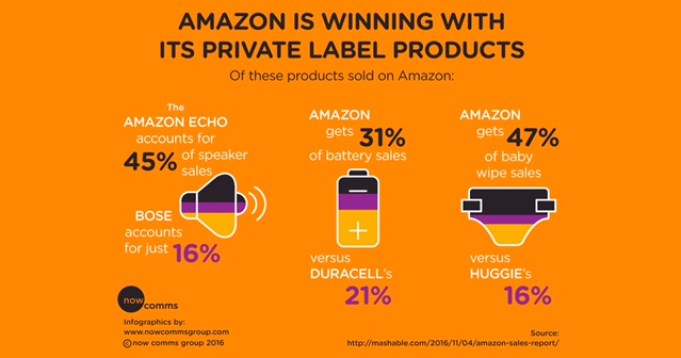 The usual business questions are always around the “win and lose” scenarios generated by a change born of new entrants, especially one as powerful as Amazon. I’ll leave the business writers to comment on that.

From the shoppers’ perspective, a wide range of cheaper, high quality products, delivered quickly to your door, is never a bad thing to have.