A run of rapidly rising petrol prices has worsened with the war in Ukraine over the past week, sending average rates on Monday to well over $2.10 a litre across major capital cities.

And it has pushed Australia Post and rideshare firms Uber and DiDi to impose fuel surcharges on consumers in the latest sign that inflation pressures are broadening across the economy.

What’s more, the most recent increases in global oil prices have yet to flow through to Australian bowsers, with CommSec senior economist Ryan Felsman saying prices may hit $2.50 a litre in “coming weeks”.

“Oil prices have soared on fears that Western sanctions on Russian crude oil exports will tighten supplies at a time when crude demand is strengthening,” Mr Felsman said on Monday.

In response to the surging cost of petrol, Uber said on Sunday it would introduce a 60-day surcharge on Australian rides, equalling about 6 cents per kilometre.

It said this meant the average trip would now cost about 50 cents more.

How much do Uber drivers really make? A new study sheds light on the gig economy

“We’ve heard from driver-partner feedback that the recent sudden spike in petrol prices is having an impact,’ Uber Australia’s Emma Foley said in a statement on Sunday.

“The goal of this is to reduce the burden of the unprecedented nature of recent fuel increases while keeping the Uber platform working well for everyone.”

DiDi soon followed suit, confirming to The New Daily on Monday it is also introducing a 6-cent-per-kilometre fuel surcharge for 60 days.

The surcharge will come into effect on March 21, DiDi said.

“We’re aware of the challenge faced by drivers with the recent surge in fuel prices, which has a direct impact on their operating cost,” DiDi spokesperson Dan Jordan said.

It comes after Australia Post last week imposed a record 3.1% fuel surcharge on its services for April — up from 2.3% in March — on the back of higher petrol prices.

Bowser prices have risen to record highs over the weekend as pressure on global oil supplies continue building amid the war in Ukraine and the financial war on Russia.

Average bowser prices in Sydney and Brisbane peaked at 215.7 cents per litre (cpl) on Sunday and 209.9 cpl in Melbourne, according to MotorMouth data.

It was only two weeks ago that petrol prices were breaking records at about 180 cpl, meaning the latest spikes have seen prices rise 19.4% in less than a month. 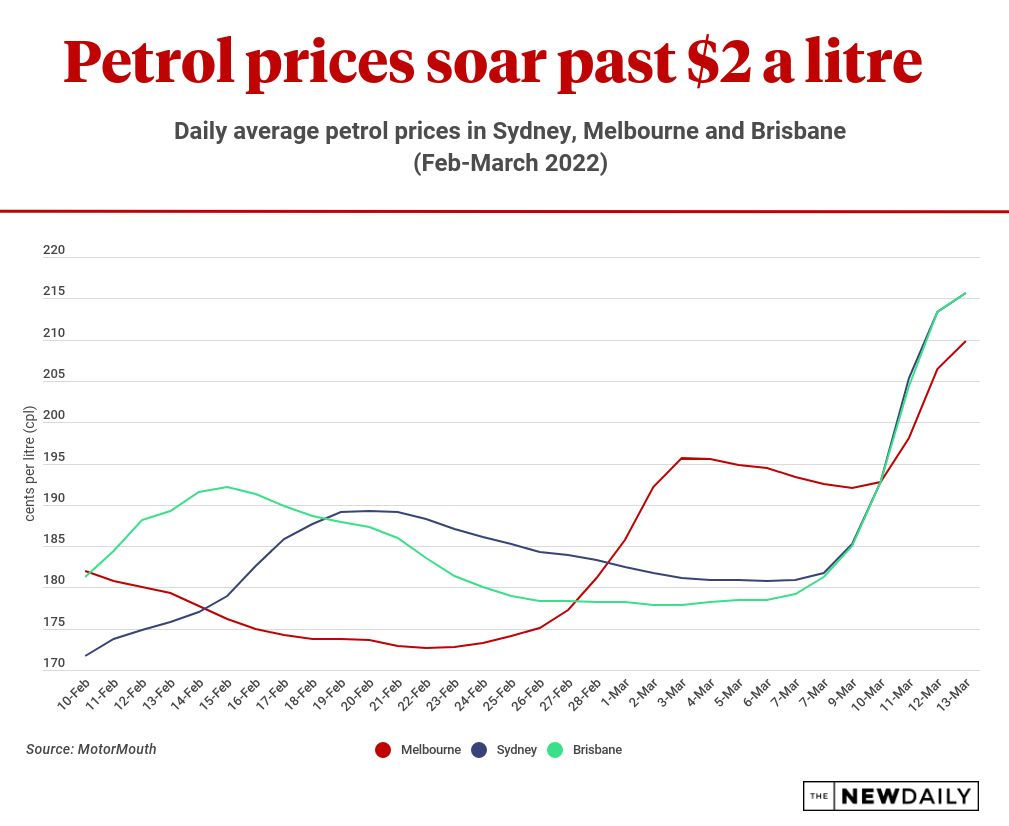 Rideshare driver Les Johnson, an organiser for the Ride Share Drivers Association, said the price increases are a “shock” to drivers who are being forced to put much more of their weekly income into their vehicles.

“If you go back about 12 months, fuel was closer to a dollar a litre because of COVID-19,” he told The New Daily.

“It’s more than doubled in price since, yet there’s been no corresponding increase in what the rideshare companies have been paying us.”

Johnson welcomed the new surcharges but said they were insufficient to cover the higher costs borne by the drivers, as they only kick in when passengers are in the car.

“They’re only paying while you’re on the job, so you’re likely only getting that surcharge for about half of the distance you drive [for work],” he said.

The surcharges are a sign that inflation is broadening across the economy, squeezing both large and small businesses.

Duncan Eadie, owner of Cumberland Building and Maintenance in Victoria, said petrol prices are now so bad he’s stopped driving out to give free quotes to customers.

He said petrol prices hit $2 a litre after the industry was forced to deal with a timber shortage and a rise in licence fees this year.

“The building industry is no longer profitable,” he told The New Daily.

“When you tell people you want $100 to visit a house to look at their job they say that’s too much, but I’ve got a Nissan Patrol and by the time I hook the trailer up and go to a job I’ve used a lot of petrol.”

Even Australia’s largest businesses are feeling the pinch, including food canning giant SPC, which told the AFR on Monday that its prices will go up 10 to 20% on the back of higher input costs including petrol.

That news comes after earlier warnings from grocery suppliers and the big supermarket bosses that their prices will rise substantially in 2022.

It all points to higher headline inflation over the next six months amid speculation about when the Reserve Bank will raise interest rates from a record-low 0.1%.

But he added that inflation in Australia still is less severe than that seen in North America and Europe, meaning Australia can afford to “be patient” and wait for wages growth to pick up before raising rates.

Treasurer Josh Frydenberg said while some Australian exporters may benefit from the higher prices, "Australian consumers will not".

More than 4500 people have now signed an online petition calling for Australia Post to reverse changes that have made it more expensive for customers to send parcels in their own packaging.