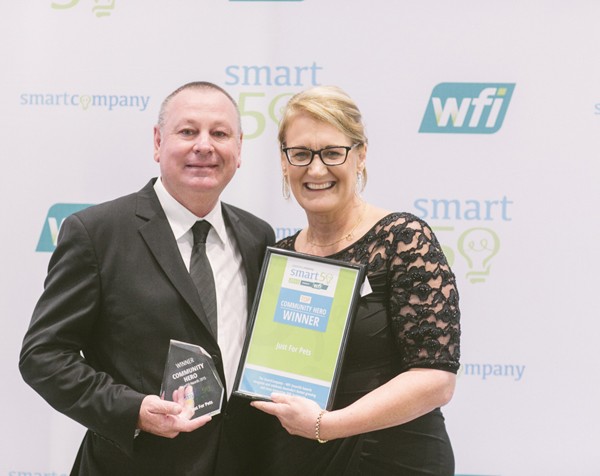 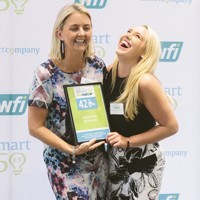 Above: The team behind Just for Pets

A host of new faces join the Smart50 Awards this year, with a majority of 2015’s finalists appearing on the list of the fastest growing Australian SMEs for the first time.

As always there is a diverse cross-section of industries represented in SmartCompany’s annual Smart50 awards, from construction and telecommunications, to retail, education and training, and information technology.

The awards, which were presented last night in Melbourne and sponsored by WFI Insurance, recognise Australia’s top 50 fastest growing small and medium businesses.

The combined revenue of the top 50 companies was more than $737 million for the 2014-15 financial year, which compares to $500 million last year.

To place on the list, companies must have recorded revenue of more than $500,000 and achieved revenue growth during each of the past three financial years.

Taking out the top spot this year is Hunter Mason, a business that specialises in construction management. Hunter Mason recorded revenue of $11.2 million in 2014-15 and a staggering overall growth rate for the three-year period of 1740%.

AussieCommerce is the Smart50 finalist with the largest revenue, with turnover of approximately $104 million in 2014-15.

Most of this year’s Smart50 finalists are relatively newly established businesses, with 36 out of the top 50 companies having been founded in or after 2008.

Awards were also presented last night to category winners, with Just For Pets scooping up the award for Top Retailer and sharing the Community Hero Award with My Cube Australia.

TopJuice was named Top Franchise and Catapult won the award for Top Explorer.

This year’s Top Digital Innovator award was presented to Pureprofile, while Broadband Solutions and Vinomofo were inducted into the Smart50 hall of fame as the joint recipients of this year’s Smart & Lasting award.