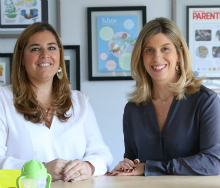 B.box for kids was born out of the “mission impossible” task of changing a newborn’s nappy on an aeroplane.

After not being able to find a product for on-the-go changing already on the market, co-founders (and best friends) Dannielle Michaels and Monique Filer got to work with a five-year business plan, involving a patented “diaper wallet” the pair believed would have strong potential in international markets.

The plan worked, and now b.box for kids is an online retailer that derives 50-80% of revenue from global exports, including from strong demand in Korea and China.

The business operates on the idea the products will “put the fun in functional” and now offers a range of brightly coloured, portable changing mats, kids cutlery, bottles and travel plates sold online and in stores across the globe. In Australia, the company has formed relationships with 750 retailers, including having its products sold in Baby Bunting and Chemist Warehouse stores.

Finding the time and cashflow to build up the operation hasn’t been easy – and many lessons have been learned around how to successfully export into Asian markets.

The business has realised the importance of protecting intellectual property, and says other business owners should be vigilant about building up brand assets.

“Parallel importing into Korea was a major problem and we spent a lot of time and money in determining the source,” says Michaels.

“We eventually found it was a customer in the US, who despite having confirmed in writing that the products were only for resale in the US, was in fact shipping the goods straight into Korea.”

That prompted the team to cease supply to the retailer immediately and put in more measures to track the sale of its products across the world.

The team has also been focused on increasing ties in China, and recently took to the CBME baby goods fair in Shanghai to promote the b.box product range.

“China has opened immense opportunities for our brand, and harnessing the right opportunity is the challenge for all businesses in our industry,” says Michaels.

The co-founders have kids themselves, which has proved an invaluable tool for determining the problems parents face and how to solve them.

With an eye on even more growth, the duo believes in regularly reviewing the big picture to stay on track.

“Stay true to your values – it is good to stop and remind yourself why you started the business,” says Michaels.