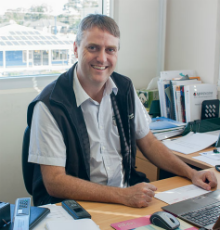 Enerdrive was born out of another company, Advance Trident Limited, which was established in 2003, before Chris McClellan led a management buyout of the firm in 2008 and changed the name and direction of the company.

The supplier of independent power products grew substantially between 2008 and 2011, at which time it was generating annual turnover of $32 million.

But in the same year, a global manufacturer of a key product sold by Enerdrive switched to a different seller, and McClellan was forced to reassess.

“My background was mobile power for boats and caravans, so I went back to grassroots.”

This turnaround was the greatest challenge the founder had ever faced; the business went from a forecast of $50 million in annual revenue to almost nothing in just days.

“Emotionally as a business owner it was tough, but the need to redirect the business was essential to survive,” he says.

“I could have easily shut the doors and had enough money to survive comfortably for many years – but deciding to invest in what we did from the outset and grow that was the perfect success story.”

Since then McClellan has worked hard to return the business to its former strength. The company’s revenue has grown by 55.5% over the past three financial years, with $7.7 million in revenue recorded for the 2015-16 financial year.

Despite managing sales and marketing for Advance Trident, McClellan’s takeover in 2008 brought on a new set of challenges.

McClellan says he struggled with suddenly owning the business and “learning all the financial aspects such as cashflow”.

“Also having the Global Financial Crisis occur only a few short months after borrowing $1.5 million certainly helped raise the stress levels,” he says.

Looking forward, McClellan is focusing on new products and seeking out new niches for his business to fill, with the hopes of becoming a nationally recognised brand at a consumer and manufacturer level. But at the same time, he is wary of diversifying the business too much.

“Our success has been to focus on what we have done well, for over two decades now and putting all our efforts into improving that and not diversifying out too far,” he says.