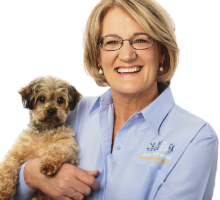 Last year Just For Pets shot to fourth place on the Smart50 rankings and chief executive Karen Justice told SmartCompany about the massive turnaround she had executed, from buying “a lemon” of a business in 2009, to generating $10.3 million from the pet products buying group in 2014-15.

“I have found that the key to unlock a solution can be found in unexpected places,” Justice said last year, explaining how a move towards pet health services in store succeeded in stabilising the business after big corporate competitors caused six of the retailers in its network to close in 2013.

Justice drew on her experience working in pharmacies (she was previously a nurse) and saw a gap in the market to provide a first point of contact for pet owners who needed health care advice for their animals but were not at the stage of going to a vet.

The model of in-store pet health checks has continued to draw customers to the business, but Justice says even now she is worried by “the thought of independent retailers closing due to corporate competition”.

Even with 180% growth over five years, the Just for Pets business held just 2% of the pet shop market share in 2013, while big competition from Pet Specialty’s operations placed pressure on the business.

Justice knows the fight on her hands and has managed to increase revenue this year, from $10.3 million to $10.9 million in 2015-16. And there’s a long-term strategy to ensure the company remains strong.

“There is strength in numbers. A strong and united group of 100 independent pet retailers will give us greater bargaining power with suppliers and an increased ability to make an impact with our group marketing,” says Justice, who is aiming to increase the store network from 65 to 100 retailers by 2021.

There are also plans to expand the number of pet health centres in stores, and negotiate new supplier agreements for the business going forward.

The business has also opened itself up to a board of independent investors.

“We now have a small, trusted group of shareholders and advisors,” says Justice.

Professional knowledge is where Just For Pets finds its strength when pitching to customers, with the company’s services also extending to a puppy school, aquarium experts and pet adoption services through the stores.

It’s this access to expertise that Justice still believes will see the company continue to grow in the long run as the store network takes the challenge to the big players.

“Even when things look impossible, there is always a way out, around or through,” she says.

“Both the experience of buying this business and navigating the group through the threat of corporatisation, we have found this to be absolutely true.”