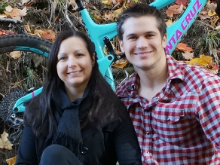 With humble beginnings over a decade ago as a bricks-and-mortar bike store, four years ago the founders of Mountain Bikes Direct were finding it hard to compete with larger overseas online retailers who were providing customers with bike parts at significantly lower prices.

Many of their fellow retailers gave up, declaring it too hard to compete, but the four founders quickly identified an overlooked niche. Today, the business has annual revenue of over $2.3 million, and a three-year revenue growth rate of 69.1%.

“We realised that there was a significant gap in the Australian market, and customer service from those large [overseas] companies can be patchy, shipping can sometimes take weeks, and there is limited warranty support,” they say.

“From speaking to customers and riders, we realised that many really want to support Australian businesses, but in the face of significant price differences, the dollar often wins out.”

The four launched Mountain Bikes Direct out of a tiny office at the back of the still-running bricks-and-mortar store. The business was online only and was focused on mountain biking equipment, which no other retailer was doing in Australia.

The founders worked hard to keep the two businesses separate, wanting to continue to provide a great in-store experience through their physical store. But as Mountain Bikes Direct eventually proved viable, the four sold the physical store to consolidate their efforts in e-commerce.

The four business partners say running the two businesses in parallel was the hardest part about starting up Mountain Bikes Direct, as they soon realised the two stores required different skillsets to operate.

“We were initially trying to sell products through Mountain Bikes Direct that were part of our physical store’s inventory, which was great for getting us started without having to outlay lots of money on stock, but it was terrible in terms of offering consistency of service to our customers,” they say.

“It wasn’t long before we realised we needed to ‘go for broke’ – get a warehouse, buy our own stock, and give Mountain Bikes Direct the chance to prove itself. It was a bold move, but it has paid off!”

The business’ inclusion in the Smart50 may never have happened if not for tough decisions made by the founders 18 months ago. Faced with a languishing and unprofitable business, the four decided on a plan to either turn the business around, or wind it down.

“We gave it six months to stabilise, and another six months to start making a certain percentage profit – if those milestones were not achieved, we would make the tough call to wind it up,” they say.

This “incredibly challenging” period was hard to overcome for the founders, who were confronted with the prospects of their business failing. Admitting they had been lax with things like controlling the business’ expenses, the four were “ruthless” in cutting costs and stabilised the business within a few months.

In light of this, the four say being in business is about “overcoming new challenges”, and taking a methodical approach to overcoming those challenges.

“We aim to get to a workable solution as quickly as possible, and not get bogged down in trying to achieve perfection,” they say.

“Challenges are inevitable – and are half the fun of being in business, – but the methods used to overcome them is what sets certain businesses apart.”