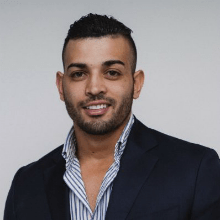 Despite recognising the “huge number” of online marketing and SEO companies that already existed in the market, when Andrew Raso and Mehrdad Homayunfard founded their business in 2012, they believed few existing players in the market were able to achieve the results that clients wanted.

Noting the complexities of the ever-changing Google algorithm, the founders built the company from the ground up to fill the niche other businesses had failed to fill.

“We had the knowledge of what we wanted – we just needed the people to help us execute,” the duo told SmartCompany.

Online Marketing Gurus now employs 50 people, and serves over 300 clients across the world. The company recorded revenue of $6.3 million in the 2015-16 financial year, and has grown its revenue by 934.7% over the past three financial years.

The company’s rapid growth has secured it fourth position in this year’s Smart50.

Raso and Homayunfard say starting their company wasn’t the difficult part; it was differentiating their offering from the masses that proved challenging.

The duo believe businesses should invest more in people and marketing in the early stages, saying business owners should “stop worrying about how much money you are going to make, this will come later”.

“Start investing profits into hiring and keeping great people. The business would have not come even close to where it is now with the people involved in it,” they say.

The SEO industry changes rapidly, thanks to the nature of the digital sector and the regular updates released for Google’s search algorithm, and as a result of this, Raso and Homayunfard no longer want be called “search specialists,” but rather “digital specialists”.

These “digital specialists” proudly proclaim the future path for their business is “world domination”, claiming the company has “a great service and a very scalable business model”.

Recently, Online Marketing Gurus went through major changes after dipping their toes into the US market, which helped the firm reach enterprise clients.

Taking on the US market required the business to compete in a much larger field, prompting a rethink of its strategy to better meet the demands of the market. In order to scale better, the founders appointed their most senior consultant into a teaching role to train junior workers coming through the organisation.

“Within three months we were now taking on junior candidates and putting them through an intensive, in-house designed program and bringing them up to the required standard,” they say.

“It was tough, and it took many long weekends to build out the program, but has been invaluable ever since.”