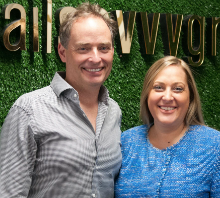 Husband and wife team Anna Corosa and Stewart Koziora have spent the past 10 years dominating Melbourne’s food and bar scene with their popular venues, including the likes of Father’s Office and Asian Beer Café, and now the hospitality entrepreneurs have their sights set on the world.

The couple, who say they book more than 75 hours a week running their business the Retail Savvy Group, previously told SmartCompany about the energy they draw from discussing the job and what’s next.

“When we’re together, we love talking about work whether it’s good or bad,” Carosa said in 2014.

“About new ideas, how we can improve, the next thing we want to do. That’s what we do, that’s our banter.”

The group’s brands have always relied on word-of-mouth marketing rather than big budget ad spends and Koziora says its customers that are responsible for driving momentum.

“We offer incredible value for money deals in our restaurants and bars and we really try to not make a big deal out of it,” he says.

“We let our customers refer us business.”

With this comes an awareness that getting customers to part with their money is a challenge – and in the food and drinks space, price and style are as important as service.

“Our customers perception of value for money is getting sharper every year,” says Koziora.

“No one really has much disposable income as a general rule of thumb and we are proud that we have held our prices for four years now.”

The Retail Savvy Group’s fifth eatery, Fitzroy Social, opened in July and aims to capture regular clientele in the area, with locals’ nights and meal deals on offer each week. This marks just one step in a broader plan to grow the business, which last appeared on the Smart50 in 2014.

Koziora says the goal is to “double the size of Retail Savvy Group in two years” and “take our best concepts to the USA” within the next five.

The rollout of the first venues posed significant hurdles, but the team have come through the other side and Koziora and Carosa now have a strong idea of the kind of people they want by their side in business – and how to motivate them.

“We invested and re-invested and struggled through the opening of our first three venues when no one would back us or thought we could survive it. It was a challenge we pushed through,” says Koziora.

When it comes to hiring strong staff in hospitality, Koziora  says there’s one key question: “Ask yourself ‘Would I mind if this person worked for the competition?’”

Then it’s a matter of taking your time with investing in staff. “Hire for attitude; hire slowly; hire with the emotion taken away,” he says.

Retail Savvy Group is aware of the competition, too – and wants to beat them by motivating the team to come up with cutting edge ideas.

“When the owners truly believe they are only as good as their last shifts, that they have a responsibility for the team’s livelihoods, then you look to innovate as fast as you can,” Koziora says.

“We feel proud when we hear our competitors say: ‘How can they do that and we haven’t even thought of it?’”

Coronavirus, Stimulus
Lois Maskiell
Daily News
Made For You
wpDiscuz