Retailers and fintechs dominate the Smart50 class of 2016 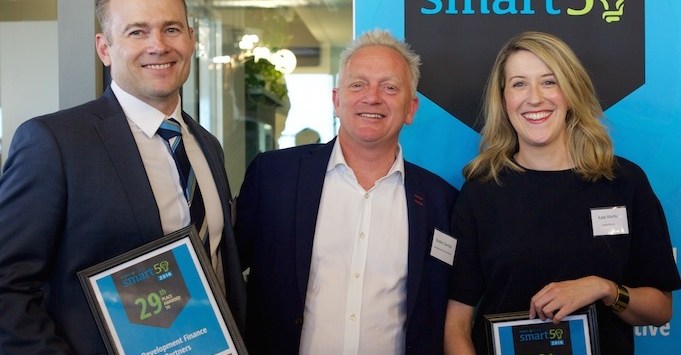 Retailers and financial technology providers have dominated the Smart50 Awards this year, with fintech providers taking out the top two positions on the list of the fastest growing Australian SMEs.

Another three finance and insurance services providers feature on this year’s list, while 16 of the 50 companies operate in the retail sector.

This is the 10th year of the Smart50 Awards, which recognise Australia’s top 50 fastest growing SMEs. The awards, which were presented at an event in Melbourne last night, were supported by a number of sponsors, including Adobe, the Export Finance and Insurance Corporation, Traction Digital, Whispering Hills Vineyard, Hargreaves Hill Brewing Co, and The Cluster.

To make the Smart50 list, companies must have recorded revenue of more than $500,000, and achieved revenue growth, during the past three financial years.

In first position is Prospa, a small business lender that was established in 2011. Prospa recorded revenue of $22 million in 2015-16 and a massive overall growth rate for the three-year period of 1074.8%.

GetCapital has secured second place in this year’s Smart50, thanks to an overall growth rate of 948.6%. GetCapital, which also provides finance to small businesses, recorded $4.5 million in revenue in 2015-16.

In third position is healthy meal provider FivePointFour, which has grown by 940.8% over the past three financial years. In 2015-16, the Queensland-based business turned over $11.8 million.

TorFX is the Smart50 finalist with the largest revenue, with a turnover of approximately $550 million in 2015-16.

The Smart50 is once again largely made up of relatively newly established businesses, with 33 out of the top 50 companies having been founded in or after 2009.

Queensland businesses have significantly improved their standing in this year’s rankings, with 14 finalists hailing from the Sunshine State, compared to seven finalists from the 2015 list.

Awards were also presented in a number of categories, with Booktopia scooping up the Top Retailer Award from a strong shortlist of five.

The Community Hero Award was presented to Media33, while Hipages was given the honour of Top Digital Innovator.

Buyers agency Cohen Handler was inducted into the Smart50 hall of fame as the recipient of the Smart and Lasting Award. The award is presented to a company that has appeared on the Smart50 in multiple, consecutive years and continues to grow through innovation.

The awards were presented at The Cluster co-working space in Melbourne’s CBD, with attendees at the event hearing from Victorian minister for small business and innovation, Philip Dalidakis.