Every entrepreneur featured in this year’s shortlist has generated serious business growth over the past three years by tuning in to a new kind of consumer – one who expects products and services to be delivered directly to them, often via digital channels, with individualised service or curation in mind.

There are still some classic retail and service categories on offer, with the likes of this year’s Top Retailer, online bookseller Booktopia, demonstrating that consumers still have a soft spot for hard copy media – but there are also a number of digital business offerings that simply wouldn’t have been possible 15 years ago.

Russell Zimmerman from the Australian Retailers Association helped judge the Top Retailer Award; Jason Gehrke, director of the Franchise Advisory Centre, helped judge the Top Franchise Award; and Kosmas Smyrnios, professor of family business and entrepreneurship at RMIT University, was once again a judge for all the Smart50 categories.

There are plenty of lessons on offer from the founders of the category winners of this year’s Smart50 Awards, and exports are where things really get interesting. Everyone from the Prime Minister to suburban business groups is fixated with selling products overseas, particularly into China – but how that works in practice remains a bit of a mystery.

This year’s Top Exporter award winner, b.box for kids, made a straightforward pitch to the Chinese and Korean markets with its baby and kids’ utensil products, and hasn’t looked back since. Ranked number 10 on this year’s Smart50, b.box supplies its products to 22 countries and founder Dannielle Michaels tells SmartCompany it’s been a challenging but rewarding process.

“Parallel importing into Korea was a major problem and we spent a lot of time and money in determining the source,” she says. The company has grown its revenue by 300% growth over the past three financial years, and the aim is to expand to 50 countries by 2017.

Meanwhile Top Retailer winner Booktopia has been able to grow its online bookselling business over the past 12 years, in part through the acquisition of competing online bookseller Angus and Robertson in 2015. In an era of intense anxiety for the publishing world, founder Tony Nash says Australians are now buying more books then when company launched in 2004.

The Smart50 class of 2016 also includes a number of franchise operations, each with their own philosophies for a harmonious and productive partnership between head office and franchisee.

The winner of this year’s Top Franchise Award, Laser Clinics Australia, has cemented this partnership into a financial arrangement. Each business is owned 50% by the franchisee and 50% by Laser Clinics, which has led to “truly engaged franchisees who work in the business every day, as opposed to silent investor checking once a month on their investment”, say the founders.

Going beyond the product

Connection to community is crucial to several companies on this year’s shortlist, both for growth of the company and the motivation of its founders. This year’s Community Hero Award goes to Media33, where a tragedy for the founders led to a strong connection to local charity, Pink Hope.

Founder Michael Lambert and his wife Jenna, director of strategy at Media33, lost a close friend to cancer in 2013. The business reached out to Pink Hope to ask what it could do to contribute to the fight against cancer, and has since completed a number of fundraising campaigns that have delivered benefits to the business as well as the community.

“It gives our agency just as much, as we hope we can give back and it gives us all a sense of reality and perspective in our everyday working lives,” Lambert says.

This year’s companies also focus on giving the best service possible to the people in their areas: Balance! Healthcare, on the shortlist for this year’s Community Hero Award, told the Smart50 judging panel about its focus on providing quality healthcare to communities like Blackheath in New South Wales, and developing indigenous talent in the health sector. 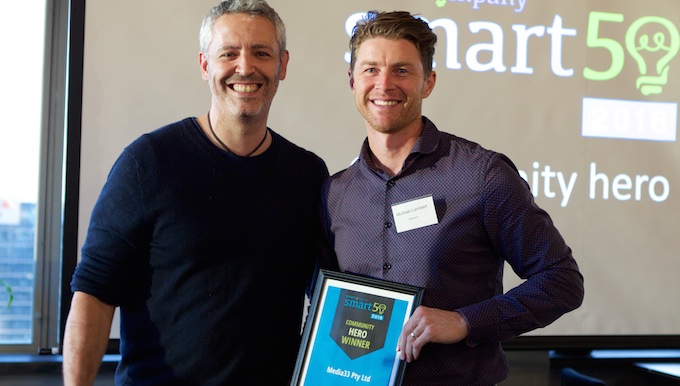 If you’re tired of hearing companies described as “the Uber of…”, imagine how some of this year’s shortlisted digital innovators feel. Not only have these businesses managed to create sustained growth through digital platforms, several have been delivering these services online well before big tech companies became household names. Top Digital Innovator Award winner, Hipages, launched its handyman directory in 2004 before becoming the “direct match” tradie service that it is today. The business has grown to generate more than $24 million in revenue in 2016, and co-founder Roby Sharon-Zipser debuted in this year’s BRW Young Rich List with an estimated wealth of $19 million.

If you’ve been following the Smart50 for a number of years, quite a few names will ring a bell this year, with several companies appearing on the list for the second or third time. This year’s Smart and Lasting Award winner Cohen Handler has delivered strong returns for young co-founders Ben Handler and Simon Cohen. Both 32, the pair have ridden the wave of Australia’s property boom through to $7.4 million in annual revenue for the buyer’s agent business. The business is ranked 20 on this year’s Smart50 list after also appearing in 2015, when it ranked in third position after booking revenue growth of 300%.