What I learnt after accidentally deleting 40,000 clients from my email database

Yesterday, I permanently deleted just under 40,000 contacts from a MailChimp audience.

In more than 12 years of marketing, I had done the mistake every marketer dreads and fears.

I managed to accidentally type DELETE into the box that warns about permanent deletion in no uncertain terms. 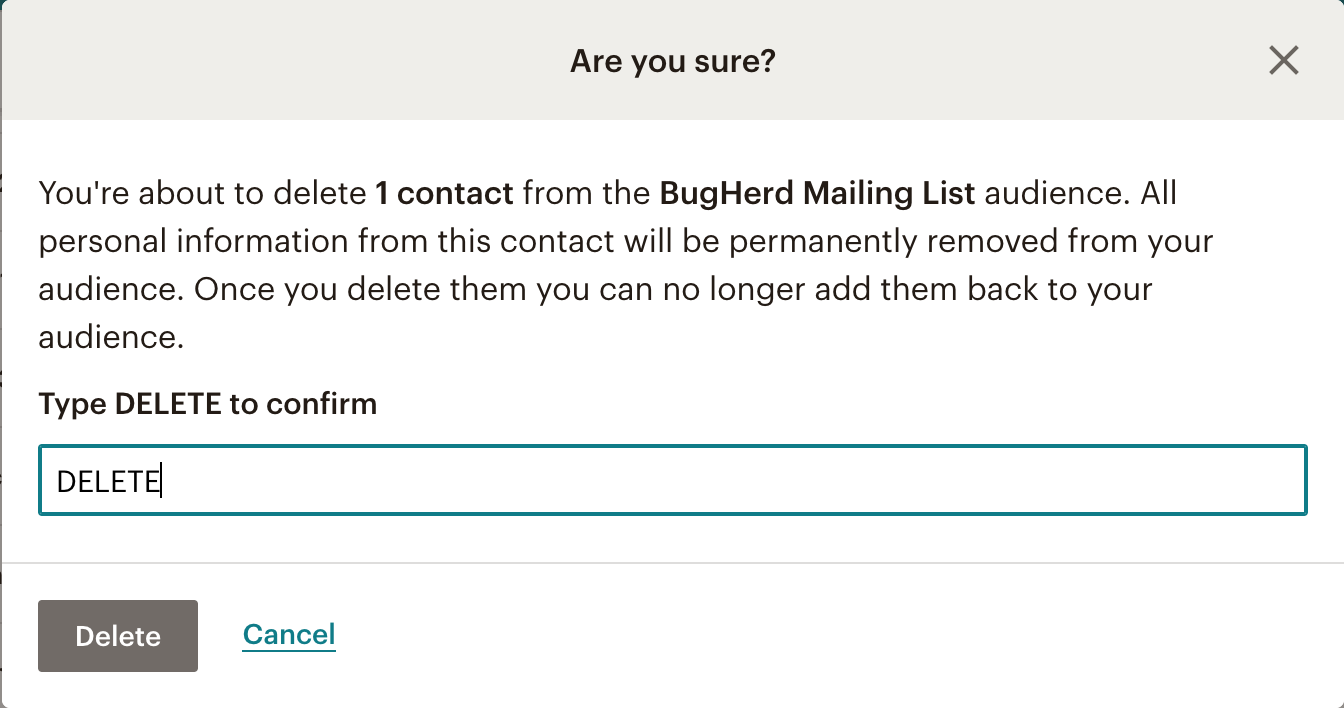 The warning box in MailChimp said 19,796 contacts. Not one.

The particular audience hadn’t been marketed to for more than four years. Though the BugHerd product had gone into maintenance mode, the sign-up form remained actively collecting new contacts. More than 15,000 new contacts during that period.

You can’t (or shouldn’t) send an email to people who signed up more than two years ago if they’ve never heard from you. It’s against best practice to send to a stale list.

Even with a few cleanups and reconfirmation campaigns, over the years the list had held onto thousands of cleaned addresses. In total, the audience contained almost 20,000 unusable or invalid contacts.

With quite a few audiences and multiple lists containing the same addresses across the globe, to avoid potential GDPR violations, we decided to remove all deemed unusable.

Did you know that MailChimp won’t let you bulk remove 1000s of contacts? There is however the ability to remove them in sets of 100.

So began the arduous task of deleting contacts in sets of 100. With almost 20K needing deletion and four clicks per group of 100, including copying and pasting the word DELETE more than 200 times. That’s 800 clicks. Not counting refreshing the page as the application slowed down processing bulk queues of permanent data deletion.

It only took about an hour and a half of my time, but by the end of the process, I was stuck in a quagmire of repetition. This is when mistakes inevitably happen, I just didn’t know how big.

During the last stages of cleanup, as I was finalising the last contacts to select and delete, I didn’t notice that the segment had unchecked itself.

Lesson one: Attention to detail

Forgetting to pay attention can lead to serious mistakes.

We’re taught that time is money. Eager to get through the process and onto more productive tasks, I rushed the final stages of the process. If I’d been paying more attention, I’d have noticed the segment had been unchecked. I’d have seen that ‘select all’ was ticked, rather than ‘select visible’.

Even though I had seen the same ‘are you sure’ deletion box 200 times, if I wasn’t running on autopilot this whole thing could have been avoided.

Is the thing you think is happening really happening?

Select all. Delete. Are you sure? Type DELETE.

As I watched the contact numbers slowly drop away by the 1000s towards zero, I started to panic. The blood drained from my face and an icy grip of fear tightened my chest. I uttered the stricken words “no, NO NOOO” over and over.

Don’t panic, but double check before panicking that what you fear is actually happening.

… and be nice to the support staff.

I did not remain calm.

Chatting to online support in a panicked state is never going to fix a problem. It’s like trying to submit a bug report by saying ‘this is broken’. They need specific details to get to the bottom of an issue quickly.

Keeping a level head and providing that detail can mean a world of difference for a timely fix.

It turns out, that the action I had taken was not fixable. MailChimp had indeed queued all contacts for permanent deletion.

I started to consider when the last time I updated my CV was.

Can the situation be fixed?

The lovely Timothy at MailChimp alerted me to the fact that I had actually exported the entire database two weeks prior. Of course, this wouldn’t be the fun emotional rollercoaster of stuffing up if things were that easy.

You can’t add contacts that have been deleted from a list back into the same audience in Mailchimp. A new audience required creation. With the existing subscriber points being updated to the new audience.

Now my mistake was cutting into developer time.

Since we’d also sent an email to the audience after the export. The entire list could be compromised as it wouldn’t include new unsubscribes and cleaned contacts. A real risk for GDPR violation.

Thankfully, past me had exported these contacts in previous efforts to (unsuccessfully) try and bulk unsubscribe them using a third-party application. Data washing was possible.

Tedious and sacrificial of more time from others. But possible.

Could this have been avoided?

In the end, it’s not the end of the world. I’ve managed to scrape clean the list and add back 18,000 perfectly contactable people into a new audience.

What should have taken a mere two hours took an entire day and a half of work (and multiple resources) to fix. All because of a slipup of attention and a hastily command-v pasted DELETE.

Possibly, this could have been avoided if MailChimp employed a differently presented warning if an entire database was queued for deletion. We’ll certainly offer that feedback.

We are taught to fear mistakes, but in reality, they happen. Whether you’re a newly minted marketing assistant or like myself have been in the job for more than a decade. We’re human. It’s how we react to these challenged and rise above them that can make a world of difference.

Remember to pay attention and double-check before you type DELETE.

NOW READ: Successful founders on their biggest failures and the lessons they learnt

Good luck getting past this!

What I don’t understand is if the system only lets you delete 100 at a time, how could thousand get deleted in one fell swoop? Not completely understanding what happened here, but sure glad I use Mad Mimi and not Mail Chimp!

You can either delete 100 at a time or all of them. Just like your gmail spam box. You cannot select a custom range of how many to delete. The maximum selection you can do is of 100 because of visible list of 100 per page. Or you can say delete all. Can’t be a number like 15,000 out of 20,000.

Why didn’t you just do a backup beforehand? Isn’t that the first lesson, ever?

I agree that a nightly back up, as well as weekly and monthly – all stored for at least a 3 month period is a prudent act to follow. Mistakes do happen. As far as MC is condrned, they give warnings that are pretty clear, but if you are tired or distracted then no one can stop you from making a mistake. I am in the investment business, and my assistent clicked through at least 6 warnings in order to make an incorrct trade that cost me $16,000. It happens. This was all on Chanie, as she said herself. Good post.