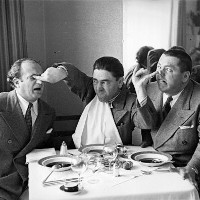 The Advertising Standards Board says nyuk-nyuk-nyuk to slapstick humour

The advertising watchdog has upheld a complaint against an online ad from mobile phone carrier Amaysim that portrayed “slapstick” comedy in which a man hits another man across the face.

While the single complaint sent to the Advertising Standards Board also took issue with the sexual content of the ad – including the depictions of a blow-up sex doll – the board brushed these concerns aside and instead focused on the image of a man in the video slapping his friend across the face.

The watchdog acknowledged the action was meant to be comedic, but noted it had ruled against similar depictions of violence previously and therefore had “no option” but to rule against this aspect of the ad.

In particular, the “depiction of violence” was considered inappropriate because the sound of the slap was “realistic” and afterwards there was an “uncomfortable silence” between the two actors.

“The board considered that the advertisement did present violence and this is not justifiable in the context of the product or service advertised,” the ad watchdog said in its case report.

Amaysim has agreed to pull the ad from its social media channels. SmartCompany contacted the company for comment but was instead directed to the statement it provided to the Advertising Standards Board.

“It’s disappointing that the content was not taken in the light-hearted and obviously slapstick vein it was intended,” Amaysim said.

“It’s fair to say that the awkwardness of a colleague slapping his workmate after witnessing him spray himself in the face with mace, and the even more awkward pause that follows, is pretty unrealistic and highlights some of the more absurd stuff we spend time watching, and laughing at, on the internet. That said, we’ll remove the video from our social channels and keep our hands off the mace when making videos in the future.”

Brand and marketing expert Michel Hogan told SmartCompany if this is the landscape the Advertising Standards Board is making businesses work in, then companies need to be on the front foot and be smarter.

“That’s your reality,” she says.

“If you don’t want your ad getting pulled because of some rogue complaint then be smarter and think harder. Don’t go for the cheap stuff – good advertising elevates and is quite moving and very powerful. When you see a good ad you know how it makes you feel.”

Hogan says if companies have to defend an advertisement by saying it was “supposed to be funny”, then the thought it might have offended some people would have obviously crossed their mind.

“Humour is tough, good humour is really good to do, but one person’s funny is another person’s offence,” she says.