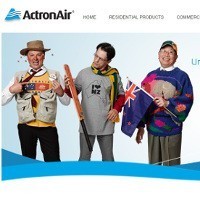 A screenshot from the Actron TV ad

A New South Wales-based air conditioning company has agreed to make changes to one of its television commercials after the Advertising Standards Board upheld two separate complaints accusing the company of racism.

ActronAir has been operating for more than 30 years and in its commercial, attempted to highlight its points of difference to international competitors.

The ad features the tagline: “Unlike some air conditioning companies, ActronAir doesn’t try to be Australian, they are Australian.”

A television viewer who saw the ad on free-to-air TV complained to the Ad Standards Board the ad “is racially offensive as it implies that those of Asian descent are not true Australians”.

Another viewer, who saw the ad on pay TV, told the advertising watchdog the ad “perpetuates racist ideals of white Australia”, taking particular issue with the prominence given to the man of Asian descent ahead of the other actors who are “all white men”.

“Australia is full of Asian Australian citizens who identify as Australian,” the complainant said.

“The ad could have shown the company as Australian in a far better way. For example, by not using race as a point of difference and reference to Australian identity. There are also no women in this advertisement either to represent Australia. We live in an increasing multicultural society, this ad is out of touch and racist.”

In its response to the Ad Standards Board, ActronAir said the ad depicts the men as companies and not individuals, and one brand is not given more prominence than the others.

“Each extra is given an equal amount of on-screen time, which further emphasises that there is no specific Asian bias,” said ActronAir.

“The advertisement is 100% focused on companies and does not in any way refer to any individuals.”

ActronAir strongly disputed any claims the ad is racist, telling the Ad Standards Board the creative concept of the ad was to “highlight the uniquely Australian aspects of our company, by contrasting us with our predominantly multinational competition”.

“The ethnic origin of the extras is not even the point of their presence in the ad,” said Actron.

“We simply selected a cross section of heritages precisely to avoid focusing on any one specific ethnicity.”

In upholding the complaints, the Ad Standards Board referred to an earlier decision to uphold a complaint against a Devondale milk ad, which it found contained a negative depiction of an Asian business man attempting to herd cattle.

In the ActronAir ad, the board found the Asian is first shown on his own and “appears puzzled and confused”. While the other men are dressed in a similar manner, the board found “the men of European and Mediterranean background are not clearly distinguishable as such and that they appear ‘Caucasian’ rather than from a particular background”.

The board ruled the Asian man is “more strongly the focus of the opening scenes and he is shown in an unfavourable light”, which “created an impression of the Asian man that was a negative depiction of people of Asian descent as being able to ‘try’ to be Australian”.

Because of this, the board found the ad breached the industry code of conduct by discriminating against a section of the community based on race. ActronAir has agreed to pull the ad in its current form and to work with its advertising agency to amend the material.

ActronAir managing director Norman Windell told SmartCompany the company is “committed to working in good faith with the Advertising Standards Bureau for all of our communications now and into the future”.

“At ActronAir we always endeavor to ensure our communications are accurate and based on fact, and have done so for over 30 years,” Windell says.

“Whilst we are justifiably proud of our uniquely Australian history and business operations, we are also committed to constant improvement, and with that in mind, we will seek to continue producing communications that do not cause offense and comply with the Advertiser Code of Ethics.”

Advertising expert and Melbourne University senior lecturer Lauren Rosewarne told SmartCompany the ad was clearly in breach of the advertising code of conduct and it is “hard to feel sorry for the advertiser”.

Rosewarne says advertising that invokes comparison is fraught and “has a long history of not working in Australia”, especially when the comparison is based on a definition of what is “genuine Australianness”.

More generally, Rosewarne says businesses should be wary of creating advertising with “punchlines” that involve race, gender or sex.

“These are hot buttons and invariably complained about,” she says.