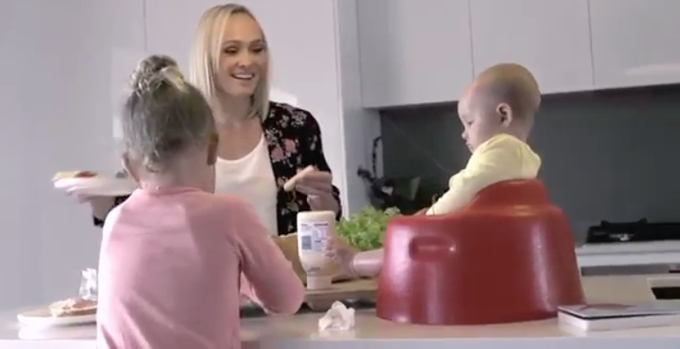 The Advertising Standards Board (ASB) has upheld a complaint against Mitsubishi Electric Australia over an advertisement depicting the unsafe use of a baby product.

The ad featured a mother using a Mitsubishi brand fridge in her kitchen, while her daughter and baby watch from the counter. Her daughter sits on a bar stool, while the baby is shown sitting in a red baby seat.

The complainant told the ASB that the baby is sitting in a “Bumbo” brand baby seat in the ad, which is not intended to be used on bench tops or other high surfaces.

“There is a red child’s “Bumbo” seat with a child in it placed on the bench. Bumbo seats are only to be used on the floor – this is specifically stated on the seat itself,” the complainant says.

“There have been incidents of children falling out of Bumbo seats from heights, causing injury.”

The Bumbo brand seats were recalled in 2012 due to a number of cases of infants falling out of the seats, which did not include a restraint or belt.

The company now offers a free restraint kit and warning sticker, and an information document from the company’s website says to “never use the Bumbo Baby Seat on any raised surface”.

In response to the complaint, Mitsubishi Electric Australia told the ASB that the commercial was not filmed in a studio, instead filmed in the actual kitchen of the mother.

“We did not build/create the ‘set’, rather it was real life environment where the talent was happy for us to film. The Mitsubishi Electric commercial is in no way endorsing the use of ‘Bumbo’ seats or offering advice on its use,” Mitsubishi said.

The ASB stated in the ruling that the seat was used in the advertisement in a matter that was “unsafe and is contrary to the safety information relevant to its safe use”.

The advertisement was ruled to have breached section 2.6 of the Australian Association of National Advertisers (ANAA) Code of Ethics, which outlines rules regarding unsafe behaviour, and health and safety within prevailing community standards.

Despite defending that the Bumbo seat is shown for “less than 8% of a 15 second commercial,” Mitsubishi took down and edited the ad, which now no longer shows the baby in the seat.

Lauren Rosewarne, advertising expert and lecturer at Melbourne University told SmartCompany that it is irrelevant how long the offending part of the advertisement was show for.

“The amount of time that a potentially hazardous situation is shown in a commercial makes no difference. A display of possible harm is such, regardless of how long it is on the screen,” Rosewarne says.

“Mitsubishi is a large company and a global advertiser and thus has no real excuse to not be mindful of the AANA Code of Ethics.”

Rosewarne says that cases relating to health and safety issues are easy for the board to decide on, because “the guidelines are clear and there is little ambiguity”.

Despite Mitsubishi using the woman’s own kitchen rather than a studio, the company is still fully liable for everything that appears in the advertisement says Rosewarne.

“If an advertiser is producing an advertisement and paying for its placement, then it is their responsibility to make sure the content complies with the guidelines,” she says.

“We’re a culture passionately protective about children’s safety and thus, it is no surprise that the ASB upheld the complaint here.”

Mitsubishi told the Board that it has warned the mother in the ad about her incorrect use of the baby seat.

The company has removed the advertisement and amended the campaign to remove the depiction of the child in the baby seat.

“We have also been in contact with the talent to advise them of the suggested usage of the product, which brought to light that she was given the ‘Bumbo’ as a hand-me-down without packaging or warning labels,” Mitsubishi said.

SmartCompany contacted Mitsubishi Electric Australia but did not receive a response prior to publication.