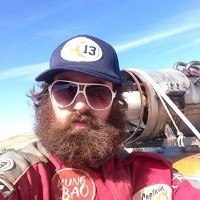 Captain Risky is known for his foolish stunts of daring

The Advertising Standards Board has found the latest “Captain Risky” television advertisement is in breach of community health and safety standards in a ruling published yesterday.

The advertisement for insurance company Budget Direct shows the fictional character “Captain Risky” jumping into a hot tub with electrical cords and power points at the end of the tub.

Complainants to the ASB said “any suggestion that water and electricity can be abused is to trivialise a potential serious safety hazard which could lead to serious injury” and “I believe this shows an extremely dangerous scenario to viewers especially those of younger years who may interpret the scene as perfectly safe thereby possibly putting the young viewer’s lives at risk by them believing everything is OK and no harm can come to them.”

While the ASB has dismissed previous complaints about Captain Risky ads it noted that in those ads “the stunts were quite outrageous” and “would not be able to be performed by most adults or children” as they involved vehicles or equipment not easily or readily available like jet packs.

“In contrast … the current advertisement was not a montage of crazy stunts but rather one single activity that involved a hot tub which is the type of item that some home owners would have or would have access to via friends or family,” the ASB said.

The ASB also noted the strong public sentiment regarding the combination of water and electricity being in close proximity with each other and the dangers this can create.

The ASB found the Budget Direct advertisement depicted material contrary to prevailing community standards on health and safety and breached the industry’s code.

Jonathan Kerr, director of marketing and digital at Budget Direct, told SmartCompany the insurance company has taken the ASB’s ruling on board.

“The Captain Risky commercials serve to demonstrate our point of difference through highly fantastical scenarios which would be almost impossible for the general public to emulate,” he says.

“However, we respect ASB’s ruling and have chosen to withdraw the commercial.”

Janey Paton, director of marketing and public relations agency Belles and Whistles, says the ruling is “disappointing” for Budget Direct.

“But I think it’s the right thing to do because it is a very dangerous scenario and they don’t want their brand to be associated with any negativity,” she says.

“If Budget Direct was to keep the ad on there and a tragic accident occurred it would only do the brand more damage.”

“They might be better off sticking to the more ridiculous scenarios and avoiding situations children can replicate in the home,” she says.