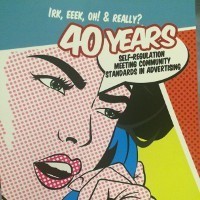 The best advertising is produced when advertisers do something “just a little bit wrong”, according to Channel Ten executive general manager Russel Howcroft.

Howcroft is the former national chief executive of ad agency George Patterson Y&R , a panellist on the ACT television program The Gruen Transfer and he was a speaker in Canberra on Monday night at an event to celebrate the 40th anniversary of self-regulation of advertising in Australia through the work of the former Advertising Standards Council and current Advertising Standards Bureau.

“The notion of ‘when it’s right to be wrong’ is a really great summary of how advertising people think,” Howcroft told attendees at the event, which included members of parliament and past and present members of the Advertising Standards Board, the body responsible for determining which ads breach the industry’s code of conduct.

“Advertisers want to tell the truth, they absolutely do, but equally they want to find little places where maybe, it’s not really what you ought to do, but by doing that you’re going to cut through and really make a difference.”

Howcroft offered eight insights into the operation of the local advertising industry:

Howcroft’s favourite example of an ad that was “just a little bit wrong but so demonstrably right” was Carlton Draugh’s ‘Big Beer Ad’, which featured “men in smocks singing about drinking beer”.

“It’s about finding those opportunities and those occasions when you can, on the surface, do something that may look a little wrong, but turns out to be right,” he said.

“Imagine deciding to call a business, a record company at the time or an airline, deciding to call it Virgin. Clearly that’s an idea that on the face of it is wrong but is demonstrably right.”

“It takes guts, it takes a huge pair of kahoonas to do something like that.”

“It’s pushing the boundaries, it’s being creative for commercial intent – that’s entirely what it’s all about.”

“I love this notion of quantum creative – the idea that creativity is measurable and then there is, if you like, this x factor around doing things right,” Howcroft told the room, adding that good advertising can result in “a quantum result for the advertisers”.

“Why? Because when there is just something a little bit wrong with an idea, as a result, the ideas cut through, [and] as a result there was huge commercial success,” he says.

“One of the things that happens when you walk into an advertising agency is you get told straight away there is no such thing as a bad idea,” says Howcroft.

“It’s a really important part of the culture of the advertising business because if you spend your time walking around saying ‘no, that’s a bad idea’, you just might miss the one that does break the mould [and] break the sales record.”

Howcroft said “of course there are heaps of bad ideas – in fact, most are bad” but the magic is in figuring that out.

“The trick is of course picking the good ones but culturally it’s all about finding that real gem there that then gets you that quantum leap,” he said.

4.     All advertising people are “advertarians”

Howcroft borrowed a phrase from Ogilvy chair Rory Sutherland to explain the way advertising can make a material difference in the world.

“It’s a fantastic notion that advertising people are libertarians in the main but what advertising can do is can change behaviour in a free way, if you like,” he said.

“In a way that doesn’t require the heavy handed legislation or the bureaucracy that’s got to make sure that people are behaving themselves.”

And Howcroft said the “other great thing about advertising is that it’s cheap”.

“As we say in the TV game now, it costs you less than the price of a stamp to actually be in someone’s living room with something creative and brilliant and persuasive,” he said.

“It’s an incredibly effective way to get people to do something you might want them to do, whether that’s social causes or to buy something.”

“The reality is advertising is full of artists,” said Howcroft, who recalled that the design of the Chupa Chupa lollipops was actually created by Spanish artist Salvador Dali.

“We need to embrace them as they can actually creatively change culture because they are giving us images that we would not have otherwise seen.”

“Yes they are doing it for commercial gain … but in many cases it is in fact art.”

“And in my view you’ve got to make that choice as soon as you walk in for the start of the advertising day.”

The answer to this question will determine the form and quality of communication you use.

“It might sound flippant but  generally at the start of the day you’ve got to make a call.”

Howcroft said he has been criticised for this belief in the past but he absolutely believes television exists for advertising.

“What television does is it creates the connections between buyers and sellers and highly creative advertising with cut through … these are the things that create this x factor,” he says.

“It’s a thing we all need to celebrate.”

8.     Governments used to be great advertisers – but they’ve lost their way

“The government used to be a brilliant advertiser,” Howcroft said.

“They used to do fabulously, wonderful, creative work. You got back to the 70s when there was lots of brilliant work.”

Howcroft said Australian governments used to lead the advertising pack but he gets frustrated with contemporary politicians who don’t make the most of the advertising.

“It drives me mad that ministers, if you like, think a press release is enough,” he said.

“It’s not enough. You have to use the power of advertising and the power of persuasive communication in order to tell the public what’s going on.”