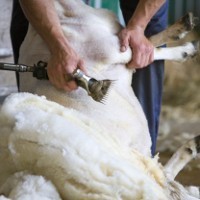 The Victorian Farmers Federation has made a formal complaint to the Advertising Standards Bureau about an advertisement by animal rights group People for the Ethical Treatment of Animals it describes as “fake, grotesque and grossly misleading” and says has the potential to “tarnish” the Australian wool industry.

The case is unusual in that it is usually activists making complaints to the advertising watchdog about businesses and industry groups, such as farmers, and not the other way around.

For example, in January optical retailer Specsavers attracted the ire of television viewers who say they were “distressed” by one of its advertisements, which they claimed promoted animal cruelty.

The VFF complaints centre on an advertisement featuring musician Jona Weinhofen from the band I Killed the Prom Queen. He holds what appears to be bloody sheep carcass, with the caption: ‘Here’s the rest of your wool coat.’

The advertisements are part of an ongoing campaign against a practice known as mulesing, where skin is removed from lambs’ backsides in order to prevent maggot infestations.

In a copy of the complaint seen by SmartCompany, the VFF described the ad as offensive and misrepresentative of the wool industry.

“The advertisement campaign is blatantly misleading inferring that all practices of shearing are cruel and ‘cause a bloodied mess’,” the VFF said.

“It makes inferences that are offensive to every Australian shearer and wearer of wool products. As well as their allegations that cruelty in the industry is rife, there is another major problem with their campaign – the sheep depicted is fake and made of foam.”

“The fact that the ‘lamb’ they are trying to represent is fake and made out of foam is grossly misleading and offensive. The group clearly intend the audience to believe that the sheep is in fact real. However, it isn’t. PETA Australia campaign co-ordinator Claire Fryer said the poster was a ‘reflection of the abuse sheep endure when used for their wool’ – thus not an actual sheep.”

The VFF is also unhappy about a claim in PETA’s campaign materials that “25% of the world’s wool comes from Australia, and it’s made from 100% cruelty”.

“This is completely inaccurate and based on unsubstantiated claims. In fact farmers in Australia lead the way in their dedication towards animal welfare. Treating animals well makes both good business and moral sense. An entire industry should not and cannot be tarnished by the actions of a few,” the VFF said.

PETA did not respond to SmartCompany’s request for comment. However, in a statement the group claims sheep shearers violently punch lambs in the face and jab them in the head with sharp metal clippers and even a hammer.

“Shearers are often paid by volume, not by the hour, which encourages fast, violent work and can lead to severe cuts on sheep’s bodies – even on at least one sheep’s penis. Large swaths of skin were cut or ripped off the bodies of many sheep by the shearers,” PETA said.

“When they’re first sheared – a highly stressful experience – lambs cry out loudly because, according to one worker, ‘they’ve been separated from their mums and they’re calling for them… They’re going, Mom! Mom!’”