Google Search withdrawing from Australia would be devastating for the tens of thousands of small- and medium-sized businesses that rely on Google for visibility to attract customers, new research from IBISWorld has found.

Liam Harrison, an industry analyst at IBISWorld, says while there are a number of industries that will be lightly or moderately affected, smaller businesses are going to be the hardest hit.

“Essentially, any small or medium enterprise across the entire economy is going to have some kind of issue,” Harrison tells SmartCompany.

There are 2.3 million small businesses in Australia, which contributed almost $418 billion to GDP in 2018-19 — equivalent to over 32% of Australia’s total economy, according to the latest data from the Australian Small Business and Family Enterprise Ombudsman.

So, which industries will be hit the hardest should Google pull its search from Australia? 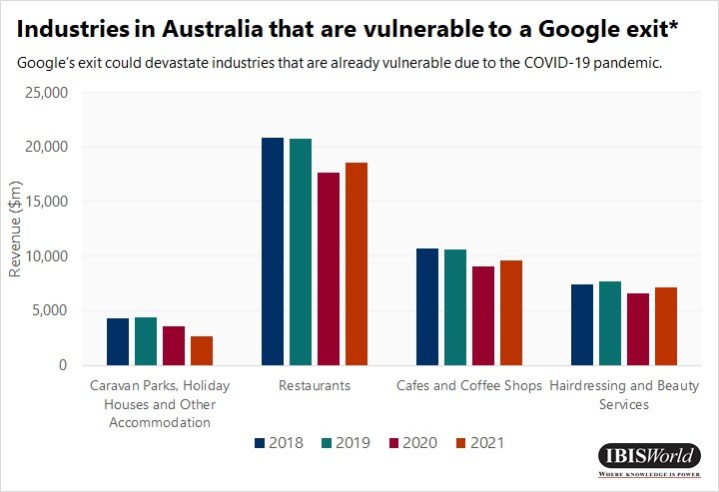 The study predicts Google’s withdrawal from the market would jeopardise the hospitality industry’s recovery. Cafes and restaurants faced significant hardship in 2019-20 because of the COVID-19 pandemic, with revenue expected to have declined by 3.1% and 15.0% respectively.

Google first threatened to withdraw its search engine from Australia last month, following disputes between the tech giant and the federal government over the draft news media bargaining code.

Microsoft, which owns Bing, said it is willing to step up to the plate as Australia’s primary search provider if Google is not able to come to an agreement with the government over the code.

“The biggest issue that comes from moving from Google to Bing is the search engine optimisation aspect. These are two different search engines and, as such, they have developed over time into two different algorithms,” Harrison says.

Due to this, marketing agencies and web design services are set to benefit from a Google Search-less Australia as small businesses are likely to seek out their services when transitioning to an alternative search engine.

“It would represent a significant additional operational cost for smaller businesses. Web design services are expected to generate $1.1 billion in revenue in 2020-21, of which 13.2% is attributable to search engine optimisation,” Harrison says.

Google has not yet confirmed whether it will withdraw its search engine from Australia.

Private Media, the parent company of SmartCompany, is a current participant of the Google Showcase program. Content from SmartCompany and other Private Media brands is featured on Showcase as part of a commercial partnership.

SMEs suspicious of click fraud are pursuing a legal battle against Google, amid concern about the company's dominance in the ad tech industry.

Following a US Department of Labor investigation into “systemic” discrimination, Google will pay millions to women and Asian job-seekers.