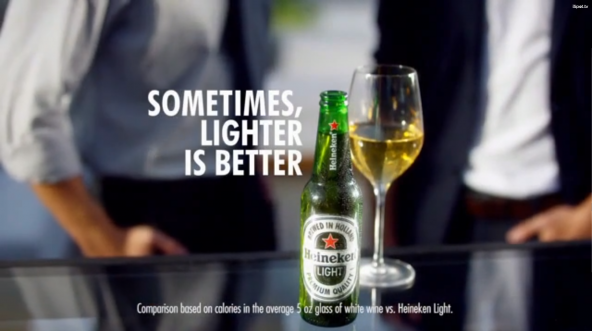 A still from the Heineken TV ad.

An advertisement from alcohol brand Heineken has copped criticism after being branded as racist for its “lighter is better” tagline.

In a recent television advertisement for its Heineken Light product, a bartender slides a bottle of the beer along a bar, passing three dark-skinned people, to reach a fair-skinned woman. The words “sometimes, lighter is better” then appear on screen. BBC reports the advertisement was aired in Australia, New Zealand and the US.

The advertisement sparked online backlash, including criticism from US musician Chance the Rapper. Social media users have said the advertisement is racist because the beer slides past people with a darker skin tone and ends up with a person with a lighter skin tone.

NBC reports Heineken has since pulled the advertisement from television.

Chance the Rapper said advertisements featuring questionable content are created for the sole purpose of getting an audience at the expense of marginalised communities.

“I’m not saying [boycott] them or go off I’m just noticing how often it happens and I think they [are] baiting consumers and tweeters,” he said on Twitter.

I think some companies are purposely putting out noticably racist ads so they can get more views. And that shit racist/bogus so I guess I shouldn’t help by posting about it. But ???? I gotta just say tho. The “sometimes lighter is better” Hienekin commercial is terribly racist omg

However, not everyone agrees that the advertisement was racist, with some social media users saying people are overreaching with their arguments. One tweet said Heineken had “bowed down to pressure” by pulling the advertisement from circulation.

I get that we’re living in a very socially fragile culture, but I don’t think the Heineken commercial message was intended to be a racial remark. Good on them for admitting their mistake, though.

In a statement, Heineken told NBC it had made a mistake with the advertisement and will learn from the criticism it had received.

“For decades, Heineken has developed diverse marketing that shows there’s more that unites us than divides us,” a spokesperson said.

“While we feel the ad is referencing our Heineken Light beer, we missed the mark, are taking the feedback to heart and will use this to influence future campaigns.”

mmm. The word used is “lighter”, not “whiter”. People being a little too sensitive. #calmdown

I see the funny side, “lighter” not referencing “whiter” These days it seems people get offended over everything. If you say you don’t like a particular individual because of their attitude or character, automatically they say you’re racist. Goodness sake get over it, has nothing to do with colour.

Yeah I agree it doesn’t seem all that offensive. Hair colour, skin colour, body size all seem to be targets for a tag.., Whats next shoe size?

Can’t believe this is the kind of stuff that is now triggering people. Lighten up!…. Pun intended.