International luggage brand Crumpler has apologised and removed one of its advertising images, after it was criticised online for running a confusing advertising campaign that depicted a naked cartoon woman in a see-through suitcase.

The image appeared at the top of the company’s website until it was changed this morning, and also appears in various promotional tweets. The campaign has formed part of the brand’s participation in the upcoming travel promotion from online fire sale website Click Frenzy.

No explanation or slogan is attached to the image, but a tweet by the company reveals it to be an ad for the brand’s see-through luggage range. 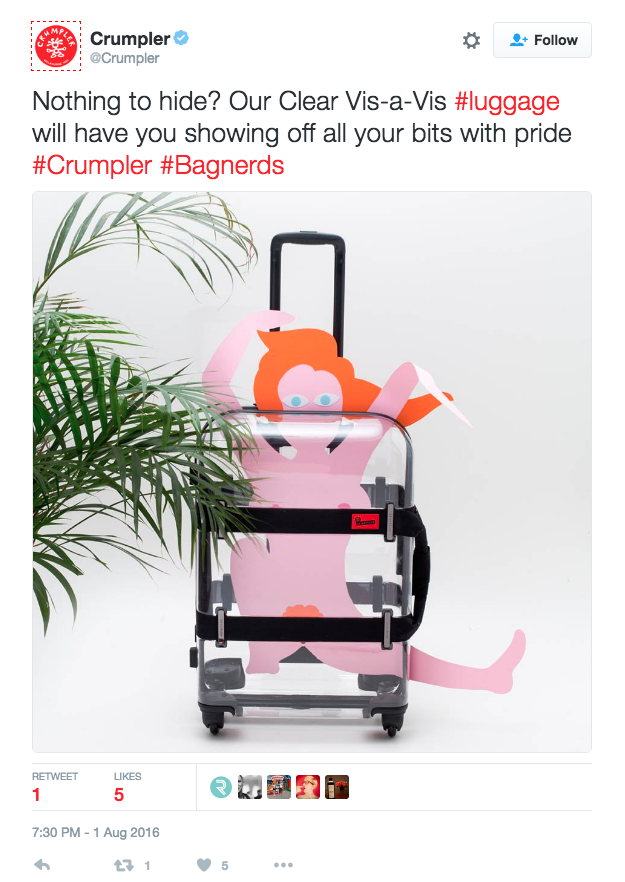 The tweet was posted on August 1, and at the time received no responses. However, the company’s choice to use it as a banner image on its website in the lead up the Click Frenzy event heated up online responses, with customers taking to Twitter and Facebook to criticise the campaign, which some labelled as “misogynistic”.

“Hey Crumpler, your advertising is so not cool. Like really really awful. What the hell are you even advertising here? Seriously?” one person Tweeted.

Wtf kind of advertising is this, @Crumpler? How did this get approved? During Friday beers with the bros? https://t.co/IECG9YaKE2

Many questioned what the advertisement was trying to convey, and how the campaign was approved in the first place.

“I don’t even understand? Who came up with this? I just want to see those board meetings once in my life,” tweeted one customer.

Wanting a response, one customer posted to the Facebook page for the company’s separate European division but was advised the advertisement was not being ran overseas.

In a statement provided to SmartCompany this morning, Crumpler apologised for the image and indicated it had since been taken down.

“Crumpler would like to apologise for the recent campaign, it was not our intention to demean or offend anyone,” the company said.

“Crumpler certainly does not condone misogynistic attitudes or behaviour and apologises unreservedly for any offence this has caused. We have apologised personally to those that have contacted us and the image has been removed and destroyed.”

Trying to cut through a “crowded advertising space”

“Basically we have a seemingly hastily put together advertisement that is attempting to achieve cut-through in a crowded advertising space,” Rosewarne says.

“Nipples and pubic hair are an attempt to get the advertisement a little extra attention than would otherwise be the case for this brand.”

But Rosewarne believes the campaign disregarded female shoppers, who she says make the “lion’s share” of domestic purchases.

“It’s extraordinary that advertisers have so little awareness that not only do women buy products but that in the context of domestic purchase, they actually make the lion’s share of purchases,” Rosewarne says.

“Therefore, the sexism aside, it is simply bad business for advertisers to advertise this way.”

The dangers of going “off brand”

Marketing expert at Marketing Angels Michelle Gamble agrees, believing the brand has “shot themselves in the foot”.

“I don’t see this as being very on brand for Crumpler, they tend to usually have quite cool advertising,” Gamble says.

“There would have been much better ways to do it, I think someone’s just had a brain malfunction here.”

Company’s producing “off brand” advertising can occur for a number of reasons, Gamble says, including moving advertising in-house or hiring new people.

“If companies don’t have strong brand guidelines and things change, then that’s where it can fall down,” she says.

“It’s best to have everyone on board when it comes to advertising and branding. Create a clear set of do’s and don’ts, and make sure you communicate that to any new staff.”

Both Gamble and Rosewarne were at a loss to explain the process that would have led to the ad being made.

“Women depicted as not only as sexualised caricatures but as chattel was always going to be an image that would be considered offensive.”