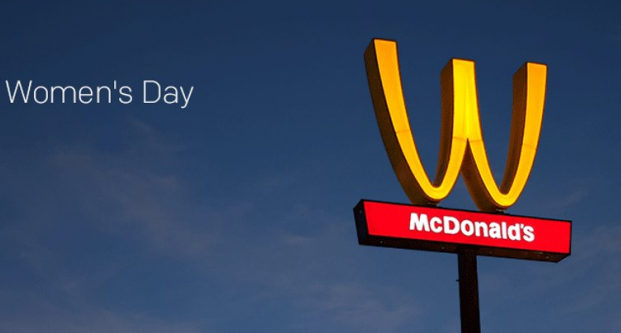 A globally-recognised event like International Women’s Day presents a prime opportunity for businesses to promote a cause or even release a product. But once the day is done, how much of the magic in these campaigns actually lasts?

On Thursday, a number of global brands launched IWD campaigns in an effort to help celebrate women everywhere. In one of the most widely circulated campaigns, McDonald’s in the US gave a nod to the day by turning some of its golden arches upside down to become a ‘W’ (for women). The campaign included inverting the brand’s logos on social media.

Today, we flip our Golden Arches to celebrate the women who have chosen McDonald's to be a part of their story, like the Williams family. In the U.S. we’re proud to share that 6 out of 10 restaurant managers are women. https://t.co/6z88OhjXpO pic.twitter.com/hXfOi3wWQf

“In celebration of women everywhere, and for the first time in our brand history, we flipped our iconic arches for International Women’s Day in honor of the extraordinary accomplishments of women everywhere and especially in our restaurants,” McDonald’s global chief diversity officer, Wendy Lewis, said in a statement to Business Insider.

However, the campaign was met with plenty of negative reviews from internet users, with many pointing out the company’s resistance to raising the minimum wage in the United States, for example.

What if you just paid them a livable wage

Hey @McDonalds, instead of empty gestures like flipping your arches, how about improving working conditions for your women workers?#IWD2017 #McStrike pic.twitter.com/CRS3uYvVJY

In a similar gesture, KFC Malaysia transformed its brand’s imagery from featuring the iconic Colonel Sanders to instead feature the woman behind the business: Claudia Sanders. Claudia is “the 12th ingredient to the Colonel’s 11 secret herbs and spices” according to KFC Malaysia’s website.

“While the Colonel created the secret recipe and ran the company, Mrs Sanders mixed and even shipped the spices to restaurants across the country — often late into the night.”

This International Women's Day, we want to celebrate another Sanders.

Learn more about her story at https://t.co/FVSHdlkfHV, and share your own about the woman who has made a difference in your life with us on Instagram by tagging #KFCIWD! pic.twitter.com/Kch6kG6zDL

In the technology sector, Smirnoff teamed up with music streaming service Spotify to produce an online tool that analyses a user’s listening habits and determine the gender composition of the artists listened on the platform in the previous six months. It then provides a playlist with an equal male-female artist breakdown.

“We developed the Smirnoff Equalizer in partnership with Spotify because we believe that when we get to discover talented women artists and their phenomenal music, we’ll all have a better listening experience,” said Neil Shah, SMIRNOFF Global Senior Brand Manager said in a statement.

Uber has also paid an acknowledgment to International Women’s Day by creating #DrivenWomen, a film that showcases its women drivers around the world.

Marketing for women needs to be ‘long-term’

Many recognisable brands have referenced International Women’s Day in their campaigns but does it work?

Bec Brideson, gender-intelligence consultant, tells SmartCompany a one-off campaign from brands can be interpreted as tokenistic, if it’s not executed well.

“I won’t balk at any movement that starts a conversation about the value of women, I welcome it,” she says.

“Yet as every year goes by, the frustration grows because businesses and brands are still treating this as a once-off calendar event rather than a long-term business strategy.”

In the case of McDonald’s, Brideson says producing a one-off marketing campaign doesn’t cut it anymore in an environment where consumers can easily research the history of a company.

“This year, McDonald’s flipping their golden arches to make a W feels like a similar version of ‘McFemvertising’, when facts about pay inequality, zero-hour contracts and little wages start to surface,” she says.

Brideson says the success of campaigns also rests on how companies actually act, beyond the values they say they support in an ad campaign.

“Last year, Audi’s Super Bowl ad about gender equality made a classic rookie mistake: they created a film about the value and importance of women – while having no women on their board.”

If brands wish to deliver an effective campaign that does not come off as tokenistic, Brideson recommends a campaign that is long-term and central to the business’ ethos.

“It’s wonderful to see business acknowledging women, but if women are not core to a businesses’ values, purpose and long-term vision then it remains a tokenistic variation of ‘shrink and pink’.”