A New South Wales small business has had complaints against its Facebook advertising upheld by the advertising watchdog after it posted a photo of a chicken burger with the caption “Tha McKlucka Muthafuka”.

Jindabyne-based burger restaurant Burger Biz posted the photo in early July, with nothing more than the caption and an ingredients list.

In response, a disgruntled patron complained to the Advertising Standards Board (ASB), claiming it was “extremely offensive language to be displaying in store and on social media”.

It is not known if the burger was also advertised this way in store, and the Ad Standards Board only fielded complaints regarding the business’ Facebook post in relation to section 2.5 of the industry code of ethics, which relates to inappropriate or obscene language.

In a response to the single complaint, the business told the Ad Standards Board there was “no intention to offend in the name of this burger”.

“Seriously it’s just a burger. No full [sic] language was used it was shortened to be a play on words,” the business said.

“[Two] cases I would refer you to that we played the word off is the movie Meet the Fockers and the recent Northern Territory advertising campaign which was broadcast internationally and locally in tv that had the slogan CU in the NT.”

The CU in the NT campaign was the focus of intense public and media scrutiny after it suddenly surfaced last year, with many suggesting it was backed by the Northern Territory’s tourism body. However, it was discovered to be an independent campaign designed to promote tourism to Australia’s top end.

“I find both those large campaigns more nationally offensive than a small funky burger business tucked away in the NSW snowy mountains,” the business continued.

“I had the minister for small business Mr John Bariolo [sic] for NSW who saw the specials board and didn’t seem to see a problem with some light play on words.”

Despite this defence, the advertising watchdog upheld the complaint against the business, referencing a previously upheld complaint against Anytime Fitness’ “F*CK UNFIT” campaign as an example of how the public still views “the F word” to be obscene.

Although noting the post was written in a “gangster” tone, a quick referral to slang website Urban Dictionary confirmed to the board that “Muthafuka” was slang for “motherfucker”.

“The board considered that the language used in the advertisement is easily understood and in the board’s view, many adults would find this phrase or use of words to be strong, obscene and not appropriate in the context of a Facebook post for a burger place,” the Ad Standards Board said.

Burger Biz has since edited the Facebook post to no longer include the “Muthafuka” section, and in a statement to SmartCompany, a spokesperson defended the business as an “American hip hop inspired burger bar serving mainly 18- 35 year old snowboarders”.

“That being our demographic we thought a fun play on words with a burger wouldn’t, and wasn’t intended to, offend anyone,” the spokesperson said. 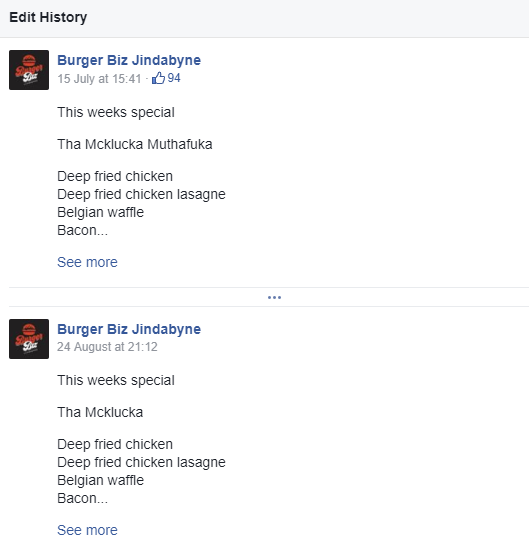 Many small businesses may not immediately view their Facebook page as subject to the jurisdiction of the advertising watchdog, and academic and advertising issues expert Lauren Rosewarne told SmartCompany this mindset is a common misconception.

“It is likely that, given the volume of user-generated content online, that many companies think an ad will just be viewed in the same light. This is not the case.”

Director at InsideOut PR Nicole Reaney agrees, telling SmartCompany the “‘casualness’ of social media does mean that brands tend to believe the same legislation does not apply”.

“However, the medium is an easily shareable platform and brands are vulnerable to how stakeholders view and perceive their messages,” she says.

SmartCompany has contacted NSW Deputy Premier and small business minister John Barilaro for comment but did not receive a response prior to publication.

hahahahahahaha so. the antique nanny squad have no problem wit the C word, but object to the F word hahahahaha thats just hillarious

Not sure why they complied. Honey Birdette’s response was to ignore them, a fact which was ignored in the reporting in their most recent industrial relations saga and phoney parade stunt.

Still seems the ASB is all just about who offends the middle aged white male. No surprises here then that ‘language’ is deemed as offensive.