Report reveals 27% of Australians use ad blockers: Should you ask users to disable ad blocking when on your site?

Asking customers to turn off their ad blockers could prove more effective than you think, according to a national survey conducted last month.

A study done by the Australian body of the Interactive Advertising Bureau (IAB) has discovered 27% of Australians use ad blocking services, a higher amount than previously estimated.

A survey of over 1800 users revealed nearly 30% of Australians used ad blocking services on their mobiles or desktops, and 14% had used them before, but no longer did.

Read more: What the rise of ad blockers means for SMEs

A startling 41% did not know about ad blocking services, and a further 19% were aware of them but had never used one.

The study was undertaken by survey company Pureprofile on the behalf of the IAB Australia Ad Blocking Taskforce to gain a “clear understanding of how and why ad blockers are being used”. The taskforce includes representatives from Google, Fairfax, Telstra, and News Corp.

“What I’ve seen from our surveys and from talking to other IAB bodies around the world, there’s a lot of young guys into tech who know about this stuff, and they get their friends and families onto it too,” Solanki says.

In February, Mumbrella reported an executive from advertising media company GroupM, Timothy Whitfield, estimated the amount of ad blocking users in Australia to be much lower.

“When I measured it by looking at a single server, one data set over another data set, it was 7.3% in Australia,” Whitfield told the Programmatic Summit in Sydney. 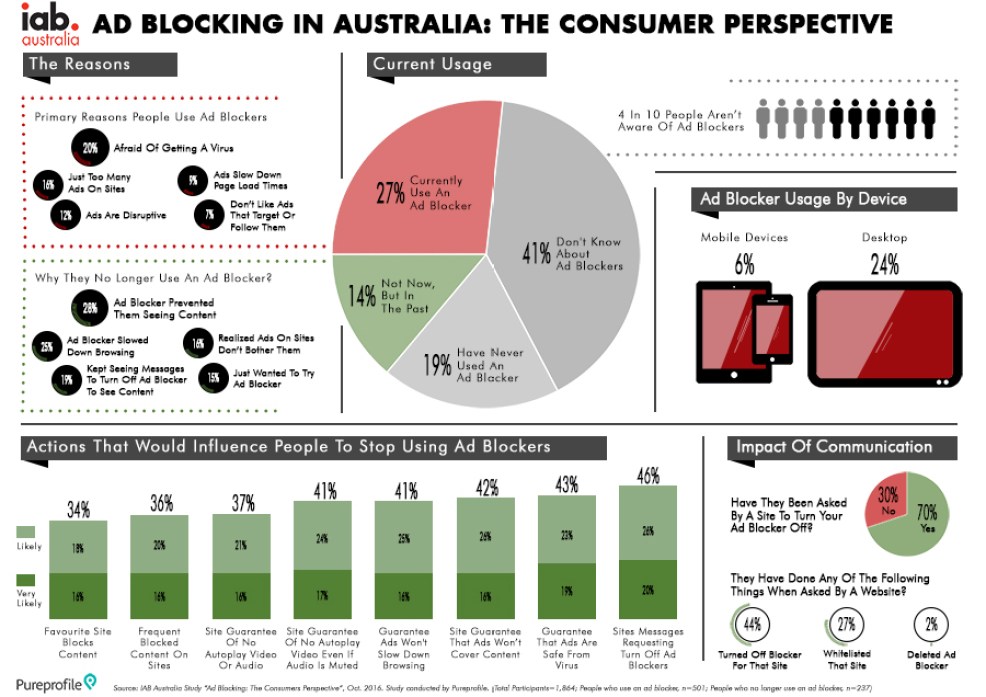 The survey also touched on the primary reasons consumers used ad blocking services, with 20% of users claiming they use them to block potential viruses infecting their computers.

Solanki says that statistic “really surprised” him, and with some further digging he found the reason behind the number.

“The primary reason that people installed ad blockers is when it is packaged in with some other antiviral software, and the user just decides to go with it,” Solanki says.

“In reality, there is a tiny majority of publishers that will serve fraudulent ads. Usually it is the less mainstream and dodgier sites that will have ads that attempt to infect your computer with malware.”

A dialogue with customers

Seventy percent of ad blocker users are asked by websites to disable their ad blockers in order to see content. Out of those who had been asked, 72% either disabled the blocking service or “whitelisted” the website, which keeps the blocker active but allows ads through on that website alone.

Solanki believes this shows more savvy publishers are realising they can have a beneficial “dialogue” with consumers.

“If publishers explain that their ads pay for their content and their journalists, most consumers go ‘okay fair enough’,” he says.

“I’ve talked to other IAB bodies around the world and they’re seeing the same thing. 7/10 users in France turn off or whitelist the site on request.”

“I think the vast majority of users see the value exchange taking place.”

The survey also revealed users dislike when advertisements cover content on websites, with 44% of respondents stating they were likely to stop using ad blockers if the site could guarantee the ads would not block content.

Solanki hopes to get more publishers on board to convey this message.

“We want to make sure that publishers can communicate the benefits of the ads they serve, such as them being safe from viruses and that they won’t cover content,” he says.

“We’re hoping to provide more guidelines so publishers can better communicate with consumers.”

Adblockers don’t block all ads, they filter acceptable ads from others.
https://adblockplus.org/acceptable-ads

I block all – no remorse for any of them.

I have an ad-blocker installed and would never consider turning it off! I have a much better experience without having to constantly turn off ads. Nothing more annoying than trying to look at a page and being bombarded with ads – if I could turn off the side bar links to twitter and facebook and goodness-knows-what, I would be even happier… it is annoying to have to scroll up or down to read the content that is being obscured by them.

I know when a contract can be enforced and cannot be enforced. In reference to ad-blockers, the end user has the determining right if they want ads or not, it is their system. Additionally, Eyeo who makes Ad Block Plus was in court again and won as expected . Excerpt “ The judge said it is perfectly legal for people to install ad-blockers in their browsers as publishers have no contracts with their readers that insist they have to look at the ads.” And this is 100% accurate – if a contract does not exist between the site and the user the no ads can be enforced or pushed without consent. Full article here: http://fortune.com/2016/03/30/adblock-plus-sueddeutsche/

Additionally, The ‘implied contract’ theory that we’ve agreed to view ads in exchange for free content is void because we can’t review the terms first — as soon as we follow a link, our browsers load, execute, transfer, and track everything embedded by the publisher. Our data, battery life, time, and privacy are taken by a blank check with no recourse.” Every time you visit a website with an ad, it’s an implied contract, but since you cannot view all the terms it’s void and cannot be enforced. However under contract law, the only valid contracts are those signed in ink and both parties. Something you cannot do online, and these “bluff statements” like “by continuing to use this site you agree or our terms and conditions” are not legal either.