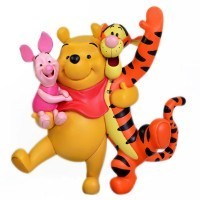 Winnie the Pooh with friends Tigger and Piglet in happier times…

A Brisbane signwriting business has been forced to pull an ad featuring a violent scenario with well-known cartoon characters from Disney’s Winnie the Pooh.

The Advertising Standards Board found the poster by Signco Brisbane breached the industry’s code of conduct in its latest ruling on violent ads.

The cartoon poster featured Winnie the Pooh pointing a rifle at the Tigger character, whilst two other characters looked on, with text promoting Signco’s email address and Facebook page.

“Given the circumstances around the world lately I find it highly offensive,” the complainant told the Ad Standards Board.

“It has used an innocent children’s cartoon to depict violence (not to mention a criminal act) on another being.”

The ad watchdog noted Winnie the Pooh and associated characters were very popular with children and were immediately recognisable because of their popularity, colour and animation.

“The board noted that the use of a character which is of principal appeal, and immediately recognisable, to children, holding a rifle is not appropriate in any circumstances,” said the board.

It found the cartoon breached section 2.3 of the Advertising Standards Code, which stipulates that ads should not present or portray violence unless it is justifiable in the context of the product or service advertised.

Signco Brisbane did not respond to the initial complaint, but advised the board the ad had been removed upon its ruling. SmartCompany contacted Signco but did not receive a response prior to publication.

Digital marketing expert Michelle Gamble, from Marketing Angels, told SmartCompany it is never a good idea to reappropriate iconic images in a shocking way to promote your brand.

While Gamble says there are obvious legal issues involved with using imagery owned by Disney, she believes such an iconic image would be counterproductive to promoting a brand.

“You overpower your brand and not necessarily in a positive light,” Gamble says.

“Good advertising should create some brand recall in the mind of the customer. If you don’t remember the brand, it’s highly ineffective.”

Gamble says many small businesses believe the ‘shock and awe’ marketing tactic of gaining viewer’s attention is the best way to advertise with a small budget.

“There is no silver bullet with adverting and I think a lot of small businesses think there is,” she says.

Gamble recommends businesses with small budgets instead consider their social media advertising strategies, such as posting quick useful videos you can make from your iPhone.

“Even if you get more awareness [with shocking ads], you don’t want your customers to have such a negative connection to your brand,” she says.