An example of the 'distracted boyfriend' meme. Source: Imgflip.

In what may be an unprecedented ruling, the Swedish advertising watchdog has ruled a Facebook post by a local internet services provider that included a picture of the popular ‘distracted boyfriend meme’ has breached the country’s advertising code of conduct for being sexist.

For readers who are unfamiliar with the ‘distracted boyfriend’ meme (which I’m guessing is most of you), the entertaining online image depicts a man looking back at a passing woman with an expression of desire, whilst hand-in-hand with a second woman who looks at him in disgust.

The image originates from a set of stock photo shoots, and erupted in popularity over the course of 2017 as internet users began to repurpose the meme to apply to almost any scenario.

Inevitably, this led to businesses trying to jump on the bandwagon and prove they too are ‘down with the kids’, with one such employer being Swedish internet company Bahnhof. The Guardian reports the company’s image, posted on its Facebook page, posits Bahnhof as the passing woman, labels the distracted boyfriend as “You”, and the disgusted girlfriend as “Your current workplace”.

The ad attracted a good deal of attention for Bahnhof, but also drew the ire of some viewers, who complained to Sweden’s ad watchdog Reklamombudsmannen (RO), which determined the ad discriminated on the basis on gender.

“The advertisement objectifies women. It presents women as interchangeable items and suggests only their appearance is interesting,” RO said, reports The Guardian.

“It also shows degrading stereotypical gender roles of both men and women and gives the impression men can change female partners as they change jobs.”

RO also determined the other woman in the ad was a “sex object” and “unrelated to the advertisement, which is for recruiting salespeople, operating engineers and a web designer”.

However, much like the Australian Advertising Standards Board, the Swedish RO holds limited power; it’s able to rule that ads contravene the industry’s code of conduct, but unable to impose fines or any other form of penalty. The company has left the offending meme on its Facebook page, and largely dismissed RO’s ruling. 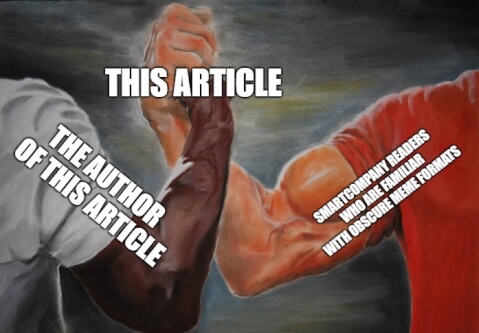 Yet another meme, unrelated to the meme above, but I wanted to include it anyway. Source: Imgflip.

“Anyone familiar with the internet and meme culture knows how this meme is used and interpreted. Gender is usually irrelevant in the context. We explained meme culture to the ombudsman, but it chose to interpret the post differently,” the company said, reports The Guardian.

“If we are to be punished, it’s because of using an old and tired meme.”

NOW READ: The top 10 most complained about ads from the past 20 years