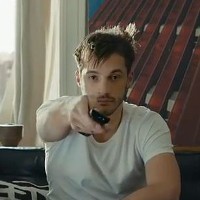 The television commercial for Lynx hair care products, which was broadcast on free-to-air television stations in January, features a young man watching a series of televisions programs of himself in the future, with a voiceover saying the man will not always look the way he does now.

Among the scenes he watches on television are images of himself as a ‘silver screen’ actor, embracing and kissing “the hottest girl or the hottest guy” in a scene reminiscent of classic film Casablanca. All 37 complaints received by the Advertising Standards Board relate to the scene in which the two men embrace and kiss.

One complainant said they “nearly fell off the lounge” when they saw the Lynx ad.

“Yes, Australia is a free country, but this ad seems to me to show the gay minority dictating terms to the normal majority,” they said.

“The ad has subject matter in about a man kissing a girl and then a guy,” said another. “Which is completely irrelevant to [the] product and disturbing for my young children to comprehend why this man in the ad would be kissing both sexes.”

Most complaints focused on the time slot in which the ad was broadcast, suggesting it was inappropriate to be shown when children may be watching television.

“Children watch TV this early in the morning and they are very impressionable,” said one complainant.

“This depiction of homosexuality is not appropriate at this time of the morning with children watching,” said another.

“If this ad was at night maybe after 9pm it wouldn’t be a problem, but still a bit hard to look at as frequently as adverts come on though.”

While Unilever admitted to the Ad Standards Board the P-rated commercial was “mistakenly booked during general programming times” during a one week period, it argued the ad does not discriminate against or vilify persons or section of the community based on their gender, sexual preference or religion or show sex, sexuality or nudity without sensitivity to the relevant audience.

“Lynx is a brand with a history of fun, playful advertising. Lynx also has a proud history of award-winning commercials which both entertain and surprise its consumers. The TVC continues this tradition,” Unilever said.

“The scenes in the TVC depicting the young man kissing another man on the lips are in line with prevailing community standards, which treat gender and sexual preference fairly, impartially and tolerantly,” Unilever said.

“It is clear from the complaints that some consumers regard homosexuality and homosexual acts as being contrary to their religious beliefs,” the company said.

“Unilever acknowledges the concerns expressed by those consumers but submits that a scene depicting two men kissing each other on the lips in a non-sexual way cannot be regarded as discriminating against or vilifying consumers with religious beliefs in a manner contrary to the code. Those consumers are not being prejudiced or treated unjustly or unfairly by the imagery in the kiss scene.”

The Ad Standards Board agreed with Unilever and ruled it is “not inappropriate to show gay intimacy, particularly in an advertisement that is humorous and over-the-top”. The watchdog had previously dismissed similar complaints about a Tabcorp ad in 2012 that showed a man kissing another man in a bar after winning a bet.

Further, the board rejected suggestions the ad showed sexually explicit material as the kiss was “fleeting” and “not particularly passionate and does not then lead to any further kissing or intimacy”.

Janey Paton, director of marketing and public relations agency Belles and Whistles, told SmartCompany Lynx is a brand renowned for being entertaining and the ad itself is entertaining.

“The scene is question goes for less than a second,” Paton says.

“I don’t think Unilever has anything to apologise for. A mountain is being made out of a molehill.”

Paton says the complaints about the ad are likely to draw more viewers to the commercial and advertisers like Unilever, which are prepared to promote equality, should be congratulated.

“Hopefully we live in a society where, even if everyone does not yet have equal rights, they will in time,” she says.

SmartCompany contacted Unilever Australia but did not receive a response prior to publication.