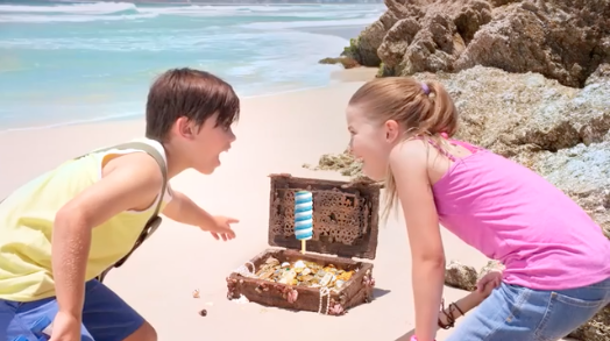 Unilever has been forced to pull an online advertisement after the Advertising Standards Board ruled it was marketing unhealthy food to young children.

The advertisement, since removed by Unilever, appeared on YouTube, and featured the Paddle Pop ice-creams. Two young children are featured in the 15-second advertisement, where they find a treasure chest on a beach that contains a “Twirly Pop” version of a Paddle Pop.

Upon eating the ice cream, the ad switches to scenes of a cartoon lion using the Paddle Pop to fight evil, before switching back to the two children triumphantly celebrating having found the ice treat.

The ad includes the tagline: “True heroes balance energy intake and activity. Enjoy Paddle Pop as a treat within a balanced diet”.

The complaint against the advertisement came from the Obesity Policy Coalition (OPC), which has previously sought action against other ads that market unhealthy food to children. The complaint states the ad breaches the Responsible Children’s Marketing Initiative (RCMI), which Unilever is a signatory to.

“Unilever has committed not to advertise its products to children under 12 years in media unless those products represent healthier dietary choices, consistent with established scientific or Australian government standards,” the OPC said in its complaint.

The OPC claims the ad is directed primarily at children and does not promote healthy dietary habits or physical activity. The complaints also outlines the ad’s themes of adventure and wonder, and animated scenes of the lion character “engaged in battle with an evil enemy” are of “primary appeal” to young children.

“Determining whether an ad targets children or their parents is always difficult and subjective,” she says.

“The marketing of ‘unhealthy food’ is often of particular concern.”

Paddle Pops enjoyed by all ages

In its response, Unilever claimed Paddle Pops are “enjoyed by people of all ages” and the advertisement had appealed to “all segments of the population”.

The company also claimed the advertisement depicted scenes of physical activity, with the ad beginning with scenes of the two children playing soccer. Additionally, the animated lion character is shown as being “highly active” and “jumping/running”.

However, the complaint was upheld, with the board specifically noting the product does not meet criteria to be considered a “healthy product” and that the themes of the ad would be appealing to young children.

“The Board noted that the theme of discovering treasure on the beach, and an animated battle between good and evil characters are both themes that would appeal to younger children. In addition, the overall theme of consumption of an icy-pole is a theme that would appeal to children,” the ASB said.

“On the basis of the confirmation by the Independent Arbiter that the product does not meet the criteria for a healthier choice product, the Board considered that the product is not a healthier dietary choice and is not permitted to be advertised to children under 12.”

“Finding that the advertisement did breach the AFGC RCMI, the Board upheld the complaint.”

Unilever complied with the decision, taking the ad down from its YouTube channel.

“The television commercial will not be rebroadcast and we are in the process of removing it from YouTube. We will also update the Product’s classification in line with this decision,” Unilever stated.

Executive manager at the Obesity Policy Coalition Jane Martin said in a statement she is happy with the decision but noted that it highlighted how easily advertisers could influence children online.

“Unfortunately, junk food and confectionery companies are certainly getting more sophisticated in the way they target children. They’re moving into digital spaces such as online advertising and apps to build more direct relationships with children,” Martin said in a statement.

“We’re pleased to see the ASB stepping up to protect children from junk food marketing.”

RCMI an “effective tool” for advertising

Lawyer and advertising expert at Ampersand Legal Narissa Corrigan told SmartCompany food companies as “very aware” of the rules surrounding advertising to children, and the RMCI keeps them in check.

“I think the RCMI has been and continues to be, an effective tool for regulating the marketing of food to children. The RCMI covers advertising across a wide range of media (including digital marketing channels), not just TV,” she says.

Corrigan also notes the ad’s placement on YouTube does not mean it is exempt from ASB jurisdiction, as the Bureau covers digital channels also. As for why Unilever chose to run the ad online, Corrigan is unsure.

“There could be any number of motives behind the choice, including avoiding the cost of TV advertising for an ad they expected would have ended up being stopped by the ASB,” she says.

In a statement to SmartCompany, Unilever said it was “committed to responsible marketing and advertising”.

“We have played a leading role both globally and here in Australia in developing and supporting advertising codes for food and beverage marketing directed at children. As part of our ongoing commitment to the RCMI and the review process under the ASB we accept the decision of the independent arbiter and will ensure that appropriate steps are taken to comply with the decision.”

You can watch a video of the advertisement below that has been re-uploaded by a Youtube user, below.