Why your business should consider offline advertising

Offline advertising for startups sounds like a joke, right?

Startups are innovative and offline ads are a thing of the last century. Nonsense.

Offline still dominates and it’s becoming more affordable, which means you might get a better ROI than a few years ago.

Get traction or die trying

It’s simple: As a startup, you either get traction or you’re done.

In the early days, it doesn’t matter how you get it as long as you’re building your critical user base. But a key thing for startup is to get traction efficiently. If you’re not making a ROI, eventually you’re going to run out of money.

Online advertising is hot. And one of the problems with things that are hot is that their price inflates.

Today it’s no longer unusual to pay more than $500 per customer acquisition. And cost per install increased by 25% last year for iOS and 52% for Android.

The cost of offline, on the other hand, goes down.

So it’s definitely a channel you should look at.

The good news is that offline ads can be easy to test. For as little as $300, you can put out a radio ad in a market you’re targeting and see how it performs.

You want to test offline alongside other media – the good thing about it is that you can test relatively cheaply. And if you’re smart and creative about it, you can get phenomenal results.

For example, a search engine startup, DuckDuckGo, placed a $7000 billboard in the startup-heavy SoMa district of San Francisco and called out the difference between the privacy you get with Google and DuckDuckGo. 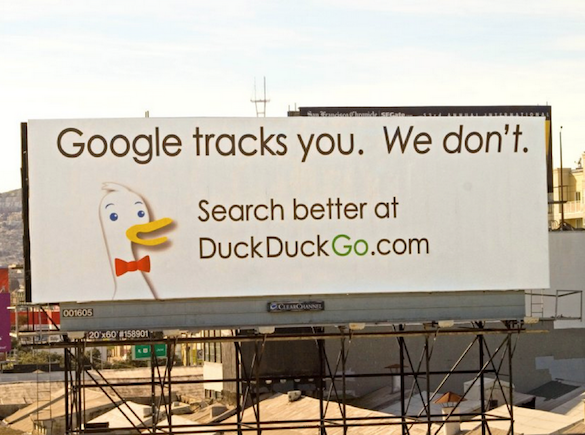 The media loved the story of a startup calling out a big guy, so aside from attention, they also got press coverage from Wired, USA Today, Business Insider, and several other blogs and media outlets.

That month, DuckDuckGo’s user base doubled.

There’s a number of options available in the offline space. What you want to do is to take a small part of your budget and break it down into smaller chunks. Then try various channels and see how they perform.

The first thing to consider is the demographics.

For example, newspaper ads will appeal primarily to an older crowd that still buys newspapers. When considering a purchase, ask the agency for an audience prospectus. It should provide you with all the info you need.

The second thing to consider is cost. An ad in Times Square will cost considerably more than some local ad in the middle of nowhere.

It’s quite difficult to test multiple channels if you can’t track your ROI.

Compared to digital ads, offline are much harder to track.

For example, you can create flyer ads that link to website.com/flyer. By tracking visits to that specific URL, you can approximate how many visits originated from your flyer campaign.

Another option is to provide unique coupon codes and offer a discount or promotional offer. Just make the name of the media (e.g. “Wired”) a promotional code.

At minimum, include source (e.g. Wired), medium (print magazine) and campaign name for that specific group of ads you’re running.

When doing your offline campaign look out for niche opportunities. Many entrepreneurs and magazines run podcasts or offer other additional content.

Maybe you can get a better rate and ROI there.

Promoting is an essential part of doing business and connecting with customers.Offline channels can boost your online traffic and business.Advertising return on investment (ROI) tracking is also important.