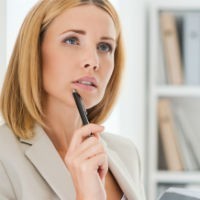 Pen manufacturer Bic has been forced to apologise after publishing a “sexist” image on its Facebook page to celebrate Women’s Day in South Africa.

The company was quickly caught up in a public outcry with many people mocking the business online for reinforcing negative gender stereotypes.

“Let’s start out by saying we’re incredibly sorry for offending everybody – that was never our intention, but we completely understand where we’ve gone wrong,” the company said.

“This post should never have gone out. The feedback you have given us will help us ensure that something like this will never happen again, and we appreciate that.”

However the apology has not been well received, with many people continuing to mock and shame the business.

“Bic, your sexist post is only matched by your ‘apology’,” one person wrote on Bic’s Facebook page.

“There is absolutely no way in which the original post could be seen as empowering to woman. And the fact that you didn’t come up with the quote in the first place is totally irrelevant. Face it; you messed up and you need to admit that, apologise and stop making excuses… and then get a new social media team.”

Another person argued that Bic clearly has a gender problem.

“You need them, clearly.”

The incident comes after Bic was shamed in 2012 by famous talk show host and comedian Ellen DeGeneres for releasing a Bic “for her” range.

The pens came in pink and purple colours and claimed to be perfectly suited to a woman’s grip.

Despite the public shaming, the company still produces a range of pens marketed at women – with the Bic South Africa Facebook account promoting its “Miss Bic” range over the weekend.

Nicole Matejic, a specialist in crisis communications, told SmartCompany Bic has obviously not done its homework.

“Clearly they’ve not tested this narrative with any women, which shows a distinct lack of audience acuity,” Matejic says.

“It should never have been signed off to go to market. It’s incredibly sexist, insensitive and you could just add numerous other descriptive words to how inappropriate this ad is on so many different levels. The kicker is happy Women’s Day – that’s just outrageous. It’s so poorly considered.”

Matejic says while the company has apologised, she is not convinced that it is sincere.

“It comes across as quite matter of fact,” she says.

“They’ve gone to the trouble of making an ad that shows a woman in the picture but they can’t come up with a public face to apologise to people. Trying to sell an apology is really hard when all you’ve got is a Facebook page and some words – there’s no human element to that.”

Matejic says women are bombarded with gender-based marketing each and every day and it is not only patronising but boring.