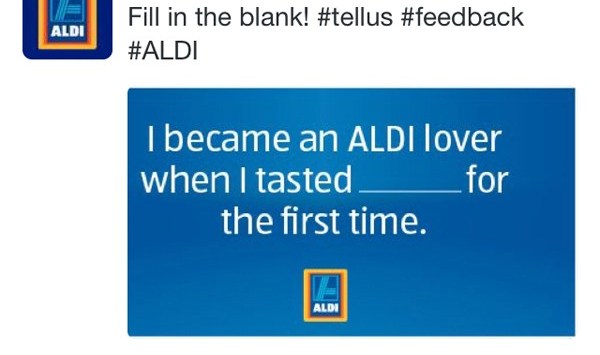 German grocery chain Aldi is the latest brand to be given a lesson in what can go wrong with crowdsourcing social media campaigns.

In a campaign reminiscent of the crowdsourcing campaign run by Qantas and the YourTaxis blunder, Aldi Australia took to Twitter this afternoon to ask followers for feedback about why they love Aldi, by filling in the blank.

In a now-deleted tweet, Aldi shared a photo with the statement “I became an ALDI lover when I tasted ______ for the first time”, along with the hashtags ‘tellus’ and ‘feedback’.

Other suggestions include “your mum”, “unemployment” and “special bargains from China”, along with some adult-only comments.

Plenty of commenters were also quick to point out the likelihood of the campaign backfiring, with one person suggesting the sentence could be completed by adding “the bitter tears of a social media idea done wrong”.

However, it seems Aldi has more friends on Facebook, with the same image receiving overwhelmingly positive responses on the social network from customers nominating their favourite Aldi products.

Crisis communications expert Nicole Matejic told SmartCompany this afternoon Aldi appears to have now “joined a rather unenviable club” of brands to have Twitter campaigns hijacked.

“Interestingly enough, many observers first thoughts are that it’s a PR prank, which shows audience trust for brands stage managing their own crisis is already low,” Matejic says.

“If it is a stunt, it’s not the kind of PR a family supermarket would generally like to associate its brand with.”

“This is (another) prime example of why it is critically important for brands to do market research on their campaigns before launch.

“A quick focus group would have told them that your likely respondents will not be G-rated in nature and your feed will be hijacked by tweeps playing hijinks with your blunder.”

SmartCompany contacted Aldi but the company declined to comment.