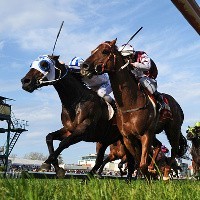 An anti-horse racing billboard that sparked heated debate ahead of Melbourne’s spring racing season has been removed after a public outcry.

The 22-metre billboard, which appeared above a Melbourne freeway close to the Flemington Racetrack earlier this week, featuring an image of a dead horse and the words: “Is the party really worth it?”

It was later removed by the landowner after a number of complaints.

The confronting advertisement was paid for by the Coalition for the Protection of Racehorses in an attempt to highlight animal welfare issues in the horse racing industry.

The group’s communications manager, Ward Young, told Fairfax the strategically-placed billboard was put up because the racing industry was ignoring their concerns.

“While we agree that it is distressing and offensive, people need to remember this is the racing industry who caused these problems, and ultimately have the ability to fix things.”

However, the racing industry has hit back at the claims, calling the advertisement “distressing” and “offensive”.

Racing Victoria chief executive Bernard Saundry said in a statement the association welcomed the news that the billboard had been taken down.

“The health and wellbeing of our equine athletes remains at the heart of our industry, which is committed to ensuring that the outstanding level of care they are afforded continues,” he said.

“We are proud of our efforts in leading horse welfare initiatives and will continue to challenge ourselves and our 70,000-strong participants to maintain the highest of welfare standards.”

Dean Wilkie, a lecturer in the School of Marketing at the University of New South Wales, told SmartCompany shock tactics – such as television campaigns to get people to stop smoking – can be unpopular but have been shown to create awareness of an issue.

“A lot of people don’t like them [shock tactics] and they switch off as soon as they see them,” he says.

“But there’s a bit of an understanding that they go through and think about that ad. So when I think about this dead horse campaign it probably has the potential to work as it does build awareness. From a business perspective, shock ads can work because (a) they generate awareness and (b) once you get that awareness the audience is more receptive to the message.”

One of the major factors in determining the effectiveness of shock tactics is whether the same story is told in multiple ways, as Wilkie says audiences can become desensitised to a campaign that tells the same narrative over and over.

“It really takes telling the same story in different ways in order for that message to get through,” he says.

Wilkie says the other thing to take into consideration is who the target audience is. In the case of the anti-horse racing ad, it is Melburnians planning to attend the spring racing carnivals.

“How likely are they to really care or undergo a call to action?” he asks.

Wilkie points to the playful Dumb Ways to Die campaign for Melbourne’s Metro Trains as an example of advertising that manages to successfully bridge the divide between the message and the intended audience.

“There is a bit of research to say for Gen Y folk it isn’t about fear and fear of dying, it is more about the social embarrassment that weighs on their decision,” he says.

A number of organisations have come under fire for using shock tactics in their advertising this year, including a life jacket company that was slapped on the wrist by the advertising watchdog for causing unnecessary alarm and distress to viewers.

Here’s the billboard, what do you think – will it change your view of horse racing? pic.twitter.com/glajHQyTkN