How ME Bank is taking advantage of the smashed avocado controversy 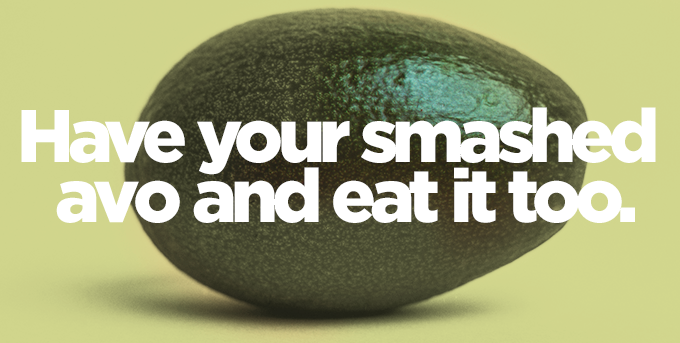 An Australian bank has taken advantage of recent social controversy to promote a new campaign – despite never planning to.

ME Bank had been running their “smashed avocado” home loan campaign through Facebook for the past two weeks, promoting home loan products to targeted users on the platform. An information page on the ME Bank website is titled “Have your smashed avo and eat it too”, and refers to “competitive rates so you can still do Sunday brunch and afford a decent coffee every day”.

However, an article written by columnist Bernard Salt, published by The Australian on the weekend, has given a new spin to the avo-friendly campaign, after the writer questioned whether young people hoping to buy property should be eating smashed avocado for brunch.

“I have seen young people order smashed avocado with crumbled feta on five-grain toasted bread at $22 a pop and more. I can afford to eat this for lunch because I am middle-aged and have raised my family,” said Salt in his article.

“But how can young people afford to eat like this? Shouldn’t they be economising by eating at home? Twenty-two dollars several times a week could go towards a deposit on a house.”

The piece sparked controversy online, with disgruntled brunch-lovers taking to Twitter to ridicule the notion that $22 a week could finance a house deposit.

Skipped smashed avocado for breakfast this morning. Excited to buy a house next week.

The debate has brought ME Bank’s marketing campaign into focus, with Business Insider reporting the bank launched the campaign in response to the controversy.

However, Scott Dare, head of content and social at ME, told SmartCompany this morning that is not the case.

“The reason we used smashed avocado in the first place is that we know there’s a lot of debate about housing affordability online, and there’s also a lot of discussion about food,” Dare says.

“We wanted to combine those two so younger people could get their loan but keep their lifestyle.”

Launching the campaign weeks ago, Dare said it had nothing to do with Salt’s piece, but the bank will now look to leverage the newfound attention.

So far ME’s Twitter account has only been responding to a few smashed avo lamenters, promoting the loan page with the help of some animated images.

@MarkDiStef @BuzzFeedOz giving up your smashed avocado in lieu of a home is not an option! https://t.co/0hKNkE7wPD pic.twitter.com/qKnLugft4X

“We want to be part of the conversation on Twitter, and right now we’re carefully targeting people who we think will be interested,” Dare says.

“So far we’ve only popped our head up, but we’re continuing to look for an opportunity.”

The effectiveness of news jacking

Leveraging current affairs and this sort of online controversy is known as “news jacking”, and communications expert at InsideOut PR Nicole Reaney told SmartCompany the method can be “highly effective” for brands.

“News jacking marketing can be a highly effective and economical strategy, we saw it recently with an airline taking advantage of the recent Brangelina news, but they backed it with full page advertisements,” Reaney says.

“Brands and businesses can find it effective for the attention and appeal they garner with consumers.”

With ME Bank looking to leverage the attention, Reaney warns the bank should act quickly, with time being of the essence.

“Speed to market needs to be the priority, enabling consumers to connect the brand with the news topic,” she says.

Reaney also notes more context may also be needed for consumers who may not be familiar with Salt’s comments.

“To make the ME campaign more effective, more context also needs to be shared, as it relies on people having heard Bernard Salt’s comments,” she says.

“Some reference needs to be made to Bernard’s comments on the campaign website.”

As for the discourse surrounding the popular brunch menu item, Reaney says it comes down to a “judgement call” if brands want to be involved in potential controversy.

“It comes down to your brand ethos and your key customer group,” she says.

I could go to the supermarket and bakery and buy the ingredients for a third of that, with leftovers. So maybe if you want to buy a home, review means of reducing expenditure, like luxuries of
smashed avacados for brunch