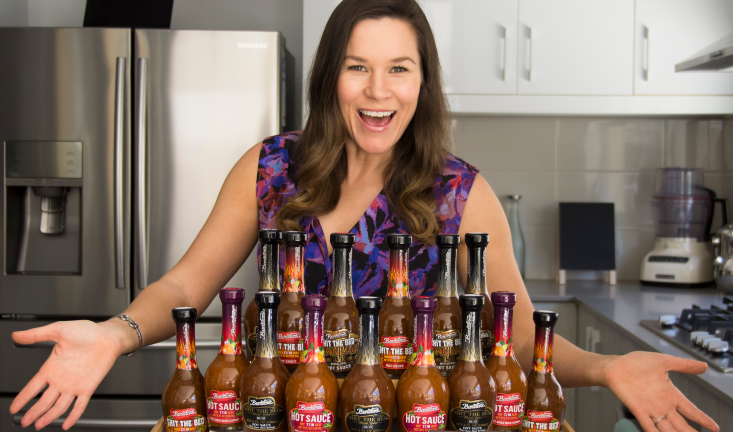 Food is a tricky business, but when it comes to finding success in the condiments aisle, Perth hot sauce business Bunsters seems to have it made.

The business’ flagship Shit the Bed Hot Sauce has picked up something of a cult following both in Australia and the US. Sure it’s got a funny name, but building a brand, and building a business, takes a little more than that, says founder Renae Bunster.

Bunsters’ Shit the Bed sauce has been a number-one seller on Amazon in the States, and it’s on the shelves in some 600 independent supermarkets in Australia.

The business generates about $1 million in revenue every year, and it’s currently in the middle of an equity crowdfunding round. At the time of writing, Bunsters has raised just over $750,000, with 21 days of its campaign still to go.

Bunster has never pitched her products to Coles or Woolworths, making the (probably sensible) assumption that they wouldn’t be won over by the spicy language.

Speaking to SmartCompany, however, she concedes that the major grocery chains could feasibly stock some of Bunsters’ other products — her milder 7/10 Hot Sauce, Black Label Hot Sauce or Posh BBQ sauce, none of which have profanities on the bottle.

Still, that’s not the route she wants to go down just yet. Getting her sauces into the duopoly has never been the dream.

“Something that people, especially people starting out in the food business, don’t realise is that Coles is one client, Woolworths is one client,” she explains.

“One person makes a decision to stop stocking your sauce, and you’ve instantly lost hundreds of thousands of dollars a year,” she says.

“Every independent supermarket is a different person.

“We’re in 600 supermarkets around Australia — 600 people have to decide to delete our product before we lose all of that money. You have way more control over your revenue.”

It’s been a deliberate strategy to get into independent supermarkets first, she says.

It’s a strategy that works for those independent stores, too, Bunster says. They know Shit the Bed sauce won’t be on the shelves in Coles or Woolies anytime soon, so it brings Bunsters fans in the door.

“Independent supermarkets sell so much Shit the Bed,” Bunster says.

“My hot sauce brings all the boys to the yard. At that yard is the IGAs, and the butchers and the bottle shops,” she adds.

Such brand loyalty is not easily won. For Bunster, having ‘the S word’ as such a central part of her brand is a double-edged sword.

“You don’t understand how hard it is to advertise products that have profanity in them on Facebook and on Amazon,” she says.

“It’s a constant, massive headache for us.”

However, because the sauce has a funny name, and a swear word on the bottle, customers share pictures of their purchases off their own backs.

“We get all this free advertising on your feed, being shared by your mates,” Bunster explains.

“But then when we go and try to legitimately advertise it or boost it on Facebook or Amazon, we can’t, because of the profanity.”

Ultimately, she doesn’t recommend dropping expletives into your branding; it doesn’t guarantee success, she says.

“If the people don’t think it’s funny and share it, you’ll never get to this point.”

In fact, her own success “absolutely happened accidentally”, Bunster admits.

But, she knows why it did. It’s all about the brand, she says. And that brand is about so much more than a name.

“Brand isn’t your logo, it’s everything that you think and feel and know about a product,” Bunster explains.

“I’ve been communicating with my customers online, cracking jokes with them and befriending them since day one,” she adds.

When people see a bottle of Shit the Bed Hot Sauce on the shelf, they think of their pal Renae, the founder suggests.

“People have developed a relationship with this hot sauce,” she adds.

“That’s where the cult following comes from.”

NOW READ: This social enterprise shows why it pays to ‘give a crap’

NOW READ: “We’re as baffled as you are”: New fintech Pineapple in unlikely trademark stoush with $1.6 trillion tech giant Apple