Foldy: The tale of a side table, thousands of Instagram fans, and a design brand willing to share

At 9pm on a Friday night in July, when millions of Australians were at home under lockdown, a fierce battle was playing out… over the name of a side table.

The battleground was Instagram and the table in question was designed by Melbourne and Geelong based furniture and accessories design company, Dowel Jones, in collaboration with its league of followers.

Thousands of dedicated design fans were voting for their favourite name (between ‘Foldy’ and ‘BFF’) in real time and Dowel Jones was sharing every development, blow-by-blow, via its Instagram stories.

The name Foldy emerged victorious and, as Dowel Jones co-founder Dale Hardiman tells me, has gone on to become “its own world”.

This world includes a growing array of variations on the new product, and entirely new products too. There’s since been Foldy design competitions, again run by Hardiman through Instagram stories, and some 5000 people are highly engaged in the Foldy universe (myself included).

The Dowel Jones brand now has more than 50,000 Instagram followers, and Hardiman says it has gone from receiving the occasional direct message on the platform to now receiving hundreds a day. Disclosure: my one contribution so far has been a classic Kenny Rogers lyric…

In one respect, Foldy is the culmination of a number of design competitions that Dowel Jones has run via Instagram since the COVID-19 pandemic hit, all with the purpose of staying connected with its community and giving creative people something to focus on instead of the news.

Indeed, Hardiman believes followers became so captivated by Foldy and its drama quite simply because helping to design and name a piece of furniture was so removed from the daily challenges of the pandemic.

“It really felt like everyone was so sick of lockdown, so it was a distraction. It was so obscure it was entertaining. You didn’t have to pay money to be involved, you just had to look at your phone and be engaged”.

The drama and intrigue provided a “tiny little light” to a lot of people who are going through a difficult time.

But on another level, Hardiman explains that Foldy also represents the “evolution” of the Dowel Jones brand, which has gone from being one that would share beautiful images of its brightly coloured and contemporary designs to one that has fully adopted the vibrant personality of its co-founders. 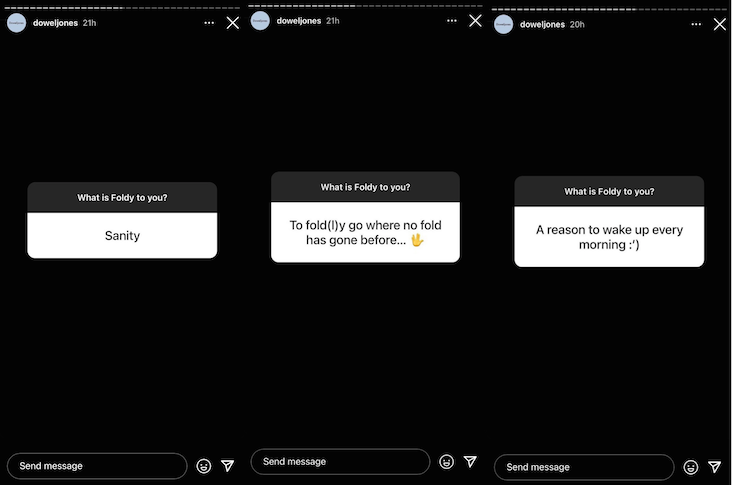 Hardiman and co-founder Adam Lynch started Dowel Jones seven years ago and up until March last year, the company was producing two to three collections each year, predominantly for commercial clients.

That changed when the COVID-19 pandemic took hold and the pair quickly responded to the drop in demand from the commercial sector to market their designs to residential buyers instead.

“Like most people, we were trying to understand how to be a business,” Hardiman says.

Some government support got them through those initial tough months, and with one co-founder and most of their operations based in Geelong, they have been able to continue making their furniture when regional Victoria hasn’t been under lockdown.

At the same time, Hardiman and Lynch also recognised the immediate value in talking to their social followers on a more human level during the pandemic and so they set about changing the tone of the company’s voice. They are two designers, so the voice of the company should also be that of two designers.

One part of this is about transparency. The original Foldy product began with a simple experiment: could Dowel Jones design a great product via Instagram, involving followers in every single step of the journey? This meant giving followers the chance to help make all sorts of decisions about the table — including, of course, the name — and Hardiman and Lynch actually acting on the feedback provided.

There was little risk, Hardiman explains, but the potential upside was huge. The worst case scenario was that it didn’t work and they didn’t proceed with the product. The best case scenario, which eventuated, was they would get a large bunch of people designing something collectively.

“It’s the best kind of market research you can do: ask someone what would you like,” says Hardiman.

They can do this, of course, because their company is small (they have six employees). If they want to run a new competition and offer a cash prize, there are no processes to go through. If their Instagram DMs start blowing up with suggestions from their fans, they can respond there and then and keep the conversations going.

Hardiman says he is constantly adding polls to the brand’s Instagram stories now, and regularly asks followers for other advice too. When he asked what colour they should paint their warehouse last year, he went ahead and painted it the colour the community voted for. 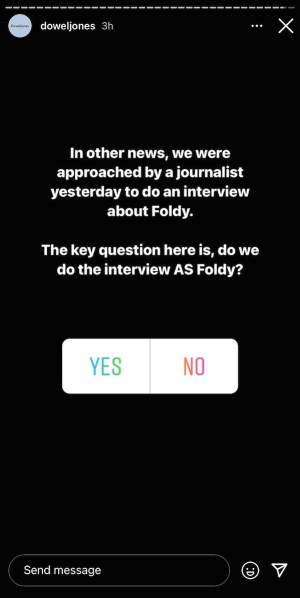 While some people have suggested they founders should outsource this part of the brand’s marketing so they have more time to focus on “more important work”, Hardiman believes the conversations that he is having with Dowel Jones’ followers are in themselves vital.

“This whole activity of Foldy has shown how important it is to have that representation of voice on social media,” he says.

Hardiman says this willingness to open up the brand to its followers is somewhat in its DNA; he and Lynch founded the company in their early 20s because they wanted to create a different kind of design company. One that made its products locally and ethically, and didn’t hide behind opaque processes like the bigger end of town.

Their goal is to run a business that is “anything but ordinary”, and Hardiman says in some ways, that allows them to “take a naive approach and just try things”.

Their approach is also about engagement, and this, above all, is Hardiman and Lynch’s aim.

In Hardiman’s words, the focus isn’t on how much money they can make. Rather, they are trying to “cultivate a community” of like-minded people who appreciate great Australian designs.

“We are designers first and foremost, and then business people,” says Hardiman.

“A lot of people think of brands as ‘other’ but the business is who we are personally. We’ve always treated it that way; we never wanted to be a highly profitable, multimillion-dollar business that makes lots of money by doing unethical things.”

Which leads up to the final important question: given how invested the community has become, will there ever be an end to Foldy?

Hardiman laughs as he considers the best way to answer. “There might need to be an end point,” he says.

“I hate to admit this, but all this activity happens on the day we think of it. There aren’t any strategy meetings or PowerPoint presentations to the team. I make a phone call to Adam.”

“These things happen in real time, but they kind of need to be, to have that relationship to time and place.”