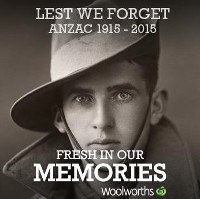 Woolworths has pulled its Anzac Day advertising campaign after copping a blast from the Minister for Veteran Affairs and now the supermarket giant could be fined $50,000.

Woolworths launched a “fresh in our memories” social media campaign where it asked Australians to share a memory of someone affected by war to commemorate the centenary of the World War I Gallipoli campaign.

The campaign involved people changing their social media profile pictures to an image of that person using its profile picture generator website which branded the images with the Woolworths logo and the text “Lest We Forget Anzac 1915-2015. Fresh in our memories”.

The attempt to tie the Anzac story and loss in war to the “Fresh Food People” caused outrage on social media with users hijacking the campaign to post photographs of everyone from Hitler to grumpy cat.

The Minister for Veterans’ Affairs, Michael Ronaldson, said Woolworths had not asked the government for permission to use the word Anzac as required by legislation.

“The Australian community quite rightly expects that the word ‘Anzac’ is not trivialised or used inappropriately and as Minister for Veterans’ Affairs, I am responsible for ensuring that any use of the word ‘Anzac’ does not provide commercial benefit to an organisation,” he said in a statement.

“In this instance, permission was not sought by the campaign proponents, nor would it have been approved.”

On his request Woolworths pulled the campaign last night and took down the generator.

Ronaldson has the ability to impose a maximum fine of $50,000 for unapproved use of the word Anzac but a spokesperson for his office told SmartCompany it would act in Woolworths’ favour that the supermarket giant acted quickly.

“I hope this is a reminder to others that the regulations are in place for good reason and that they will be rigorously enforced,” Ronaldson said.

The controversial Woolworths campaign follows growing concern over the number of businesses attempting to cash in on Anzac Day.

Online blog Poppies for Profit is naming and shaming businesses such as Target and Virgin which are using the Anzac centenary to market their products and services.

“Everyone has an emotional connection to the word Anzac,” she says.

“Using it in a brand newsjacking way for their own corporate capitalist purposes shows a real disrespect and betrayal of the Anzac legacy.”

Matejic says asking people to put the Woolworths logo on the photograph was “ill conceived” and “shows a lack of media and social media acuity.”

She says SMEs looking to avoid these sorts of crises should do their homework and know their audience sentiment.

“If you want to do something about Anzac Day do it in a respectful way and don’t try to commercialise it,” Matejic says.

“A lot of people make the mistake in social media of trying to do the hard sell.”  She says Woolworths could have commemorated Anzac Day without putting the Woolworths brand and “fresh” slogan on the campaign.

“On Facebook they are letting people just go for it right now, it’s like they launch the campaigns and then just walk away,” she says.

SmartCompany contacted Woolworths but did not receive a response prior to publication.