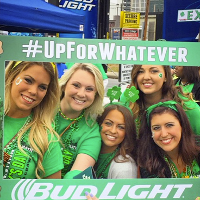 But the campaign backfired, with Twitter users complaining it was dangerous and encouraged sexual harassment and even rape.

“We understand some people misunderstood our St. Patrick’s Day post and apologize to anyone who was offended,” a spokesperson for the business said in a statement to Mashable.

“We would never condone disrespectful behavior and our intention was only to playfully celebrate the holiday.”

“We see a lot of examples of companies that use social media for campaigns in the hope that they go viral and have unintended consequences,” she says.

“I really don’t think they were hoping that sexual harassment would be the end game here, they wanted it to be pranks and novelty.”

Rosewarne says businesses like the idea of social media because it’s cheap.

“The problem is that it can very quickly get out of hand,” she says.

“We’ve seen this with Coca-Cola and Coles, a lot of businesses assume goodwill on the part of their followers and that’s a grave mistake.”

“Actually strategise a plan B,” she says.

SmartCompany contacted Bud Light for comment but did not receive a response prior to publication.