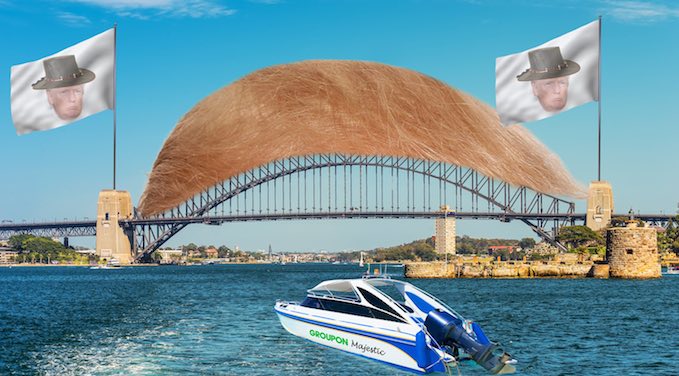 The first day of April is a marketer’s dream, and for good reason.

Businesses get to snap up publicity off the back of a clever, well-timed gag.

Here at SmartCompany, we received a number of tongue-in-cheek press releases and have been watching brands take to social media in a bid to dupe their fans. Here are some of this year’s best April Fools’ pranks:

1. Groupon is offering to help you run away to an island paradise if Donald Trump becomes president of the United States

Those pranksters at Groupon are clearly feeling the Bern (or maybe they stand with Mama Hillary?).

The coupon website has offered to help one Australian family escape a “Trumpified planet”.

Groupon claims the offer, which involves being sent to an island paradise, will last for four years — coincidently, the length of a US presidential term.

Introducing Coles NEW hover trolleys! Gliding into a store near you soon…#hovertrolley pic.twitter.com/eX3NabBcoI

The cool kids at RedBalloon are no strangers to April Fools’ Day.

Last year, the staff at RedBalloon got creative and sent us tickets to beard floristry classes. (We were gutted when we learnt they weren’t real. Designer stubble and plain ol’ Ned Kelly face-fuzz is so 2014.)

This year, RedBalloon is spruiking a number of quirky experiences, including the chance to white water raft on giant inflatable flamingos.

What could go wrong?

An email sent our way at 1am in the morning with the subject line “BREAKING” caught our eye.

It was none other than tech and gadget site Product Hunt claiming to have acquired Yahoo!.

This spoof gets bonus points for including a fake screenshot of the acquisition appearing on TechCrunch.

Now, listen hear, Product Hunt: if you do happen to purchase Yahoo!, we expect to be the first ones to know.

Why spend 20 hours on a cramped international flight when you can whack on some oversized goggles and traverse the grungy streets of Berlin from the comfort of your own home?

Contiki is today offering young Australian travellers the chance to take part in guided, virtual reality tours for as little as $149.

SmartCompany has yet to independently verify whether or not the beer offered on such tours is in fact real beer, or simply a holographic projection.

6. Justin Bieber makes his debut as a jockey

Smart50 alumni Punters.com.au makes it onto this year’s list for its scoop on how Justin Bieber is set to make his debut as a jockey.

The betting bible claims Bieber is booked for the Queen Elizabeth Stakes and is due to ride a horse by the name of Mongolian Khan.

“We talked about the danger, sure, but at the end of the day Justin’s entire life has been about taking risks,” Bieber’s management reportedly told Punters.

“He thrives on it and wouldn’t be the artist he is today without acknowledging and nurturing that aspect of his character.”

ISLANDS & CO is one of the world’s leading private island retailers, Based in Manhattan, the company manages the retailing of luxury islands across the globe including the Caribbean, Dubai, Sodor, and a new bespoke range in the Spratleys…